Investigatory Powers Bill: As supported by world's most controlling men 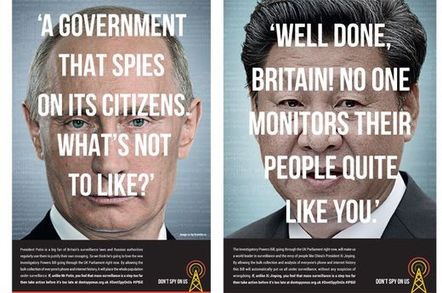 IPB This morning in London, on billboards and in print, the world's most authoritarian leaders are "endorsing" the UK's Investigatory Powers Bill.

The "New" Snoopers' Charter would make the UK "a world leader in surveillance," according to the Don't Spy on Us coalition, a collective of civil liberties organisations behind the provocative campaign.

The progress of the bill is viewable on Parliament's website, and it is understood that it will likely progress to the report stage shortly after the Queen opens Parliament on May 18.

It will "inspire tyrants like Vladimir Putin and Robert Mugabe", according to the coalition, which is not alone in its alarm regarding the legislation.

Earlier this year, the UN's special rapporteur on privacy criticised the bill, and invited the British government to “desist from setting a bad example to other states”, and “outlaw rather than legitimise” the Investigatory Powers Bill's provisions for bulk surveillance and bulk hacking.

While the Labour party has declared that it does want the Investigatory Powers Bill, it also has reservations about the bulk snooping powers included in the bill.

Talking to The Register, Eric King, director of the Don't Spy on Us coalition, said: "We have been talking to all of the parties, our members include many cross-party organisations, and we're very enthused by the work that Kier Starmer [Labour MP] and Joanna Cherry [SNP MP] are doing. We hope there's going to be more opposition to what is a bill that we're still very concerned about."

As it stands, the bill is "putting forward practice that is likely to be unlawful, and not just in a couple of areas, but some of the core areas of the bill," including those obliging the retention of the public's data en masse are "likely to be unproportionate and unlawful," according to King.

As we've reported, the British state's legal facilities for storing and accessing citizens' communications data have been found to be unlawful more than once.

One claim currently before the Court of Justice of the European Union, brought by MPs David Davis (Con) and Tom Watson (Lab), raises central questions about how access to material is authorised, and whether it is permissible to retain data in a blanket manner, according to King.

The Davis/Watson claim has rolled up to the high court, though no date has yet been set for a judgment, while the date for the advocate general's opinion is known to be July 19. "We imagine as they've fast-tracked the case that they will want to deliver judgment as soon as they have reached it," said King.

Additional concerns about legality have been raised in Europe, though not in the European Union, but rather in the Strasbourg court, where King believes two recent judgments suggest that "prior suspicion at an individualised level may be required before interception."

King believed that in the two European Court of Human Rights cases of Roman Zakharov and Máté Szabó and Beatrix Vissy, the standard was set for needing to have identified the individual, and that sophisticated proportionality analysis was necessary before the state could apply to any surveillance legislation.

In the eyes of the civil liberties coalition, the Investigatory Powers Bill fails to meet many of these tests and would again allow the government to engage in illegal activities under the guise of upholding the law.