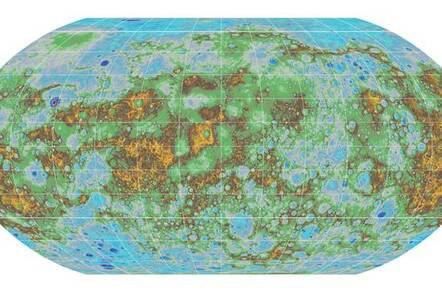 NASA, the US Geological Survey and various university faculties have released a dream package for the imaginary hiker and geodata geek: a topographical model of Mercury.

The release is based on data delivered by the Messenger spacecraft that slammed into the planet last year. Also taking part in the release are Arizona State University, the Carnegie Institute of Washington, and Johns Hopkins University's Applied Physics Laboratory.

It covers the whole surface of the planet, the USGS release explains, including “the planet's craters, volcanoes and tectonic landforms”.

The mission made 4,104 orbits around the planet, delivering more than 100,000 images the USGS scientists processed to produce the maps. The image processing identified Mercury's features and stitched the whole lot together into the final model.

The mission had previously released a digital elevation model (DEM) obtained from Messenger's Mercury Laser Altimeter, but that had very limited coverage of the planet's southern hemisphere.

As Johns Hopkins explains, “Because of the spacecraft’s highly eccentric orbit, the laser altimeter was able to make measurements only in Mercury’s northern hemisphere and near-equatorial region, leaving the topography of most of the southern hemisphere largely unknown, until now.”

Except that you'd die on the surface of the planet, a bottom-to-top climb would almost be within the scope of a human walker: the lowest point on the planet is on the floor of the Rachmaninoff basin 5.38 km below the average elevation, while the highest peak is 4.48 higher, near the equator.

The public can download the data from the NASA's Planetary Data Services archive. ®