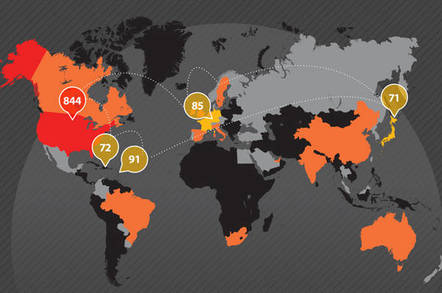 Domain-name overseer ICANN has killed off the majority of Africa's new internet.

California-based ICANN, which has faced repeated criticism for its failure to reach beyond a North American audience, saw just 17 applications from Africa out of just over 1,900 applications for new dot-word domains back in 2012.

Of those 17, nine this week received termination notices from ICANN, despite them having paid $185,000 for the right to their dot-names and having run through an evaluation and contract process.

The applicants for .naspers, .supersport, .mzansimagic, .mnet, .kyknet, .africamagic, .multichoice, .dstv and .gotv – all based in South Africa – signed contracts with ICANN in 2015 but failed to put their generic top-level domains live within a 12-month window. As a result, ICANN is now rescinding their rights.

The only company from Africa that has successful put new top-level domains online is the registry operator for South Africa's .za, ZACR, which applied for and runs three city TLDs: .capetown, .durban and .joburg.

Meanwhile, ICANN is in active dispute with the biggest application from Africa: .africa. One of the two applicants for the name, DCA Trust, is suing ICANN in a Los Angeles court for running a sham process in which it attempted to hand over the name to its preferred bidder, ZACR.

DCA Trust has already won an independent appeal against ICANN in which the organization was found to have broken its own bylaws. Documents from that case revealed ICANN's staff had actively interfered with the process to ensure that their preferred bidder won, then sought to cover up their involvement and then knowingly misled people about the coverup.

Last month, an injunction was filed against ICANN after it attempted for a second time to hand the .africa domain to ZACR despite the ongoing legal fight. ICANN has until today to file a response to DCA Trust's allegations.

Of the remaining three applications from Africa, one has been withdrawn and the other two have until November to put their names live or they face the same fate.

Last month, ICANN warned more than 200 companies that it will kill off their rights to new top-level domains if they didn't put them live on the internet.

The majority were big brands, including Intel, Netflix, Lego and Nike which paid for the rights to their dot-brand name but have no current plans to use them. Most don't wish to cover the cost of putting the names live or to start paying ICANN's annual fees.

It was perhaps unfortunate that of the first 10 termination notices than ICANN has sent out, nine of them come from Africa.

The self-absorbed DNS overseer was heavily criticized when it rolled out its "new gTLD" program for failing to communicate its plans beyond the mostly North American audience that attends its conferences. Of the 1,930 applications, 844 came from the United States. A further 150 or so came from US organizations based in offshore tax havens such as the British Virgin Islands and the Cayman Islands.

In response, the organization launched a belated "applicant support program" and set aside $2m to fund it. But again, it failed to communicate the program's existence to people outside its own halls. As a result, the program received just three applications, two of which were rejected [PDF] for not meeting the criteria. ®