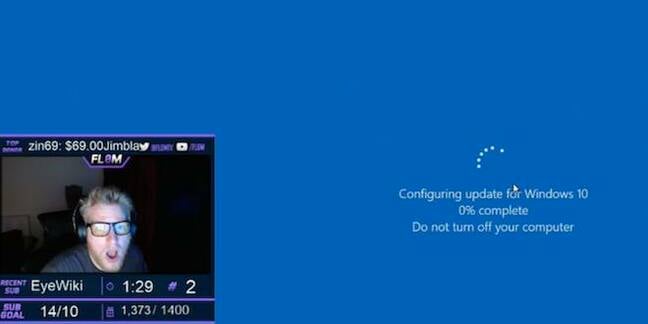 At the end of April, Microsoft's Windows 10 nagware interrupted a live TV weather broadcast to urge meteorologist Metinka Slater to upgrade her computer.

A week later, while playing Counter Strike: Global Offensive to 130,000 spectators on Twitch.tv, Erik Flom was blasted out of his match by the Windows 10 installer. This was even after he spent a few frantic minutes trying to delay the upgrade until after his game had ended. The fun starts about nine minutes into this recording of the live stream. "Fuck you, Windows 10!" was Flom's response.

But it's not just TV presenters and video-game celebrities getting caught out by Windows 10's enthusiasm to plonk itself down on PCs. Plenty of Register readers, who have also had their work and home computers hijacked out of nowhere by the software, have been in touch to share their stories.

Here's a collection of the best tales we've heard so far:

Philip Jones was most unimpressed when Microsoft's software got in the way of a volunteer-led effort to produce audible copies of newspaper articles for people with sight problems:

I volunteer as a recorder with a Talking Newspaper charity for people with vision problems. Two weeks ago we were 30 minutes into a recording when, without any apparent warning, an announcement appeared that the system was going to upgrade to Windows 10 and we were told not to turn it off. I felt I had no option but to suspend our recording and the three of us simply had to wait for over an hour while the installer did its stuff.

It's still not clear how this happened. The part-time manager had previously clicked to opt out of the upgrade and that morning had declined an offer to upgrade. How did the upgrade start without prior warning?

We run Adobe Audition for our recordings and use it full screen. The operating system was Windows 7 Home Edition – it's a small charity.

My guess is that the nag screen the manager had rejected had reappeared for another bite at the cherry, its message was hidden behind Audition and because it wasn't clicked away, it defaulted to perform the upgrade.

I find this quite scandalous. Three people had given up a morning of their own time to make this recording, the system had already had its blandishments rejected and a major program was in full swing – with significant constant processor, memory, disk and display use – and yet still the nag screen defaulted to "yes".

If anyone other than Microsoft had done this they would have been accused of hacking.

In the event, the resultant operating system exceeded my low expectations in that it didn't disrupt settings too much, although it did make Audition twitchy about our non-default setup, which delayed us further. It looked remarkably like Windows 7, which helped the recorder. Fortunately, as a Register reader I was aware of the pitfalls behind the "Express Settings", found the very small font "Customise Settings" and was able to avoid us getting suckered into too much data-slurping.

But all in all a very unpleasant and unnecessary experience. It's an astonishing way to treat your customers, if less public than a TV weather report.

I think there are plenty of parents out there who can relate to Arizona-based Justin's plight:

I let my six-year-old play Minecraft on my gaming rig. She comes down an hour or so later, and tells me the computer screen says something about my files still being there. I think: "Oh crap! Did she click some type of ransomware link!?!"

I get up there and see I now have Windows 10. She clicked the damn pop-up.

Turn on, tune in, drop the connection

I run an online radio station, called Texas Exile Radio. Love the actual operation of Windows 10 in comparison to Windows 8, but the forced upgrades are an absolute nightmare.

First, I couldn’t actually get my free upgrade from Windows 8 to install without it hanging. The paid-for version was happy to plunk itself onto the hard drive as a clean install on the very first attempt for a mere five quilliard Altairian dollars, no problem at all. But that only happened after I'd wasted about three days wrestling with the free upgrade through every possible installation path I could research.

Second, there’s no way to turn them off — no way to stop them shutting down the computer in the end — and that’s disaster for the box that’s meant to be streaming music to listeners 24/7. What’s even worse? More than half the time, Windows reboots and then announces: “Sorry, the software couldn’t be updated.”

Why in God’s name Spacial can’t make a decent version of SAM Broadcaster for OS X, I’ve no idea, but I can assure you that if they did, I’d be outta there faster than a Tory MP caught down in Soho by a Sun reporter.

Finally, Roger Ellison has managed to cling onto Windows 7, but says – funnily enough – getting non-Windows-10 updates is a real drag:

I've refurbished several thousand PCs while working for a small non-profit by the name of WinCycle in Windsor, Vermont, US, since 2006.

As part of the process, I run Windows Update on all the machines before putting them up for sale. Until the Windows 10 release, checking for and installing Windows 7 updates took less than a day, and generally no more than an hour or two. Once the big list of updates appeared, well, you know the story. It can take a while.

Checking for Windows 7 updates now can take anywhere from one to five days before the list of updates appears. Rebooting or following whatever sage advice Redmond has online does not affect the times involved.

When Windows Vista appeared with much hype, the same thing happened to Windows XP updates. It took a long time for the list of updates to appear. After Vista assumed laminated-turd status, the XP update list appeared in a reasonable timespan again.

When something like this happens once, I can call it a fluke. When it happens twice, it is more like a trend. Am I just being crazy, or is Microsoft indulging in psychological gamesmanship to frogmarch PC users to upgrade to the latest greatest thing?

Other side of the story

In the interests of balance, your humble hack must point out that Windows 10 has now managed to find itself running on 300 million devices, according to Microsoft's own stats.

"With the highest customer satisfaction of any version of Windows, we want everyone to enjoy the benefits of Windows 10," said Yusuf Mehdi, Microsoft's corporate veep of Windows. Yeah, we get it, Yusuf. Everyone. Reading you loud and clear on that one. ®