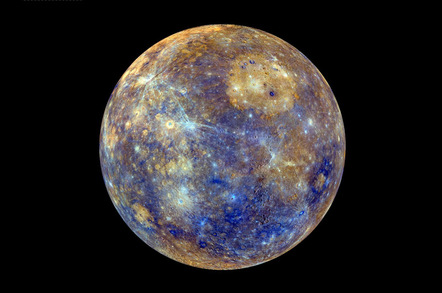 Mercury in all its colour-enhanced glory. Pic: NASA

Mercury will transit the Sun next Monday, and those wishing to witness this occasional event without risking blindness will be pleased to know that NASA will have full coverage.

The planet will creep across the Sun's fiery surface between 11:12 GMT (7:12 AM EDT, 12:12 BST) and 18:42 GMT (2:42 PM EDT; 19:42 BST). The entire transit will be "widely visible from most of Earth including the Americas, the Atlantic and Pacific Oceans, Europe, Africa and much of Asia", according to EclipseWise, although eastern Asia, Japan, Indonesia, Australia and New Zealand will miss out.

No matter, because NASA TV will be streaming a live feed from the Solar Dynamics Observatory. It's also offering a "live panel discussion on the science behind the mercury transit" from 14:30 GMT (10:30 AM EDT). NASA TV's schedule has details on all the planned action.

Mercury transits the Sun around 13 times a century, with its last pass in 2006. The next chance to catch the phenomenon live will be on 11 November 2019. ®