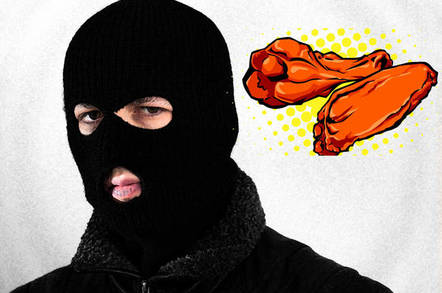 Police in Maryland, US, used controversial cellphone-tracking technology intended only for the most serious crimes to track down a man who stole $50 of chicken wings.

Police in Annapolis – an hour's drive from the heart of government in Washington DC – used a StingRay cell tower simulator in an effort to find the location of a man who had earlier robbed a Pizza Boli employee of 15 chicken wings and three sandwiches. Total worth: $56.77.

In that case, according to the police log, a court order was sought and received but in many other cases across the United States, the technology is being used with minimal oversight, despite the fact it is only supposed to be used in the most serious cases such as terrorism.

StingRay devices work by impersonating cellphone masts, so nearby phones connect to them and automatically hand over their unique ID numbers, allowing investigators to track the handsets and their owners by location.

Annapolis police never found the thief but he represented just one of 17 occasions on which the city of 40,000 people used the device in 2011.

There are strict restrictions on use of the device because it sucks up information on any mobile phones in the area, raising privacy concerns. It is also capable of effectively shutting down a specific phone, forcing it to be reset, or causing a service blackout in an area.

An outcry over the enormous use of the device by Baltimore City police led to a change in the law that required the cops to get a court order before carrying out surveillance except in extreme circumstances. But even with that law in place, information remains very limited on where and for what the devices are used and what is done with any data gathered.

The lack of a federal law also means that the rules around StingRay use vary widely across the country, with some states, including California, placing strict limitations around it, and others requiring minimal justification from law enforcement.

Efforts to find out how extensively the technology is being used have also run into a wall of secrecy, with the devices themselves often provided to local law enforcement by the FBI who have gone to extraordinary lengths to keep details of their use quiet and also required local law enforcers to sign confidentiality agreements [PDF] before being allowed to use the device.

In a growing number of cases, people accused of a range of crimes, from minor to serious, have seen their cases dropped or their sentences reduced after StingRay evidence has been removed in order to keep its details secret, with prosecutors often citing national security.

Defense attorneys across the country are increasingly looking to see if the police have used a StingRay device against their clients. Even in cases where the individual in question admits their guilt, many question whether the use of technology that is supposed to be rolled out only in the most serious circumstances are appropriate for minor thefts.

Others question the high cost. Howard County has spent at least $452,000 on its systems since 2011. Annapolis Police received a $185,000 grant to cover its use. Other counties have reported spending on average $250,000 for their versions, some of which is on acquiring equipment and some on annual maintenance contracts and upgrades.

When it does acknowledge the existence of the technology, law enforcement often cites important cases where it has helped solve serious crimes, including kidnapping and armed robbery.

However, the fact that it was used to track down a man who had stolen $50 of food, and the ongoing lack of transparency and justification for StingRay use across the county continues to worry both public defenders, privacy advocates and legislators. ®

Hey, cop! You need a warrant to stalk a phone with a Stingray – judge

Hey so, uh, any chance this is constitutional?