Welcome to Hotel Zuckererga: You can log out, but you can never leave 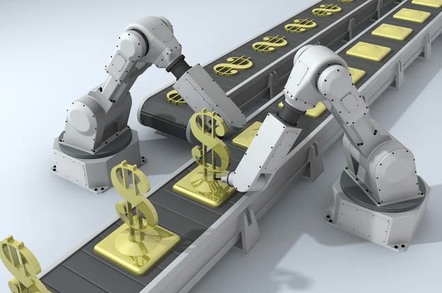 Analysis Facebook smashed through expectations for its first quarter of the year.

A surge in mobile ads saw revenue up 52 per cent to $5.38bn while the user base grew to 1.65 billion – 22 per cent of the world’s population, and extracting every byte of data (and every penny from those bytes) from that existing user base is the company's objective.

The decentralised internet has consistently proved a challenge for every company whose revenue is based on selling advertisements. Liberated audiences are comfortably blocking intrusive ads and navigating to different websites that provide a preferable signal-to-noise output.

Combating this, the largest of the web zaibatsus is working to silo its audience within its own data-slurping and impression-flogging ecosystem. Facebook has consistently presented schemes friendly to advertisers while providing greater access to its own services. Of late, it has sold this as a charitable exercise in gifting the 'net to the planet's poorest with Free Basics.

Opening the F8 developer conference earlier this month, Zuckerberg announced his intention to build "bridges" instead of "walls," but Facebook's messenger and AI plans are really walls dressed as bridges. They will silo more businesses services within Facebook's own competitor-less zone, and bots are the hottest part of this.

Bots are also seen as a way to provide in-app services, and Facebook sees these services as allowing messaging to become a platform in which developers and businesses can build upon to drive their own business interests.

As Zuck told investors in the Q1 earnings call, users will no longer need to leave the app to satiate their needs:

We have Thoughts for Messenger that let you do things like order flowers or get news without leaving your Messenger thread. But this is all very early, and we're rolling these experiences out carefully and slowly over time.

The Zuckerborg have a playbook "for building out these ecosystems at scale.” This starts with person-to-person communications through sharing updates with friends and creating regular connections between those within users' social network, and is now at the state of creating "organic activity around public entities," according to Zuckerberg himself, who told investors:

[W]hether that's businesses, public figures like athletes and celebrities and types of folks that people want to interact with on these different platforms, and we did that on Facebook in News Feed group pages, and we're working on a number of different ways to do that in Messenger. One of those is bots. And one of the good things about bots that we've seen is that it can decrease the amount of time that you have to wait before you get a reply back from interacting with a message.

Facebook's research has shown that its users already pester businesses, and those business respond, but the company has committed some of its AI research resources into "the responses that businesses give to common questions and can confidently provide the right reply a lot of the time. And when we can do that, then that decreases the latency. And predictably, people want to do more of that activity".

It will be the Zuckerborg’s own AI that will – in theory - learn how to answer questions for public entities to speed up interactions with the public. This will likely be a bit of a revenue maker too. Zuck reckoned: "After you start building out that segment of businesses and then public figures on the platform, then on top of that you have just a good amount of intent on these platforms to build a good business on top of that. That's stage three."

China: Ahead of the curve

Earlier this month, UBS analyst Steven Milunovich reported that Apple faced an "existential threat" from messaging bots. As noted in Alistair Croll's blog post: "What's a bot OS?", the notion that bots - such as those featured in Tencent's WeChat messaging service - are simply scripts returning phrases upon request in chat rooms mistakes how thoroughly those messaging services have begun to integrate micro-apps and micro-payments into their software.

WeChat allows users to exchange virtual currency through its "red envelope" app, which has even received uptake as a mobile payment system in markets in China, according to Croll. This is the true future for in-application payment systems, he told The Register recently, suggesting: "If WhatsApp went after SMS, then in-chat payments are going after Western Union."

Last year, Facebook itself announced a payments feature in Messenger - though total payments and fees revenue dropped 20 per cent year-on-year in Q1 2016.

Zuckerburg recognised the lack of mobile uptake for payments but is sticking rigidly to his playbook – waiting to introduce businesses to Messenger before launching that expected moneymaker. Payments, he told investors, "will continue to face headwinds throughout the year, given that the substantial majority of that revenue relates to payments from games played on personal computers".

As such, it is expected to be some time before Messenger can provide a fully integrated payments platform in the style of WeChat - though plans do seem afoot. ®