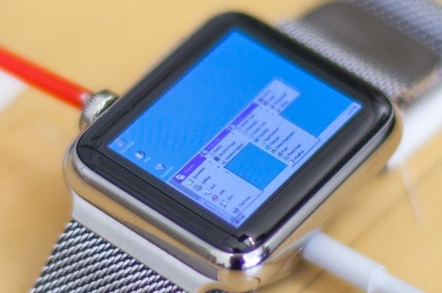 A chap named Nick Lee has managed to run Windows 95 on his Apple Watch.

We say “run”, and not installed, because he's had to emulate it. As Lee explains the Apple Watch packs a 520Mhz processor, 512MB of RAM and 8GB of storage, specs that put many a PC to shame when Windows 95 launched back in 1995.

Of course Windows 95 just wasn't built to run on Apple's custom ARMory, so he had to get an x86 emulator running on the Watch and then get Windows 95 running on that emulator.

He used the Bochs emulator for the job and helpfully posted the tweaks needed to do the job to GitHub.

The code works, but emulation always comes with a heavy overhead so it takes an hour to boot Windows 95. That long period necessitated another hack: Lee built a machine to jiggle the Watch's digital crown to prevent the device falling asleep.

As the video below shows, the results are curious, rather than producing anything usable.

Still, it's nice to know that if you absolutely must get a Windows 95 fix, it can be done on your wrist. ®