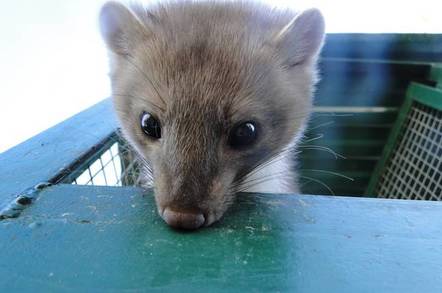 CERN's search for exotic particles has been put on hold for a couple of weeks – after a small mammal gnawed through a power cable, incinerated itself and killed current to the world's most expensive scientific instrument.

According to the daily log for the Large Hadron Collider, a beech marten, a weasel-like mammal common in Europe, chewed through wires in a 66-kilovolt electrical transformer. The nibbling nobbled the critter, but also damaged the transformer and cut power to the refrigeration units that keep the LHC from overheating.

"We had electrical problems, and we are pretty sure this was caused by a small animal," said Arnaud Marsollier, head of press for CERN. "We are in the countryside, and of course we have wild animals everywhere."

The LHC will now be out of action until mid-May, Marsollier said, while the cabling is replaced and officials check to see if the power outage has caused any knock-on damage. The 17-mile LHC tunnel has to be chilled down before particle smashing can begin again.

It's not the first time the LHC has run into trouble from wildlife. In 2009 The Reg broke the story of a bird shutting down the LHC after a bird dropped a piece of bread into one of the LHC's outside substation, temporarily disabling it. ®