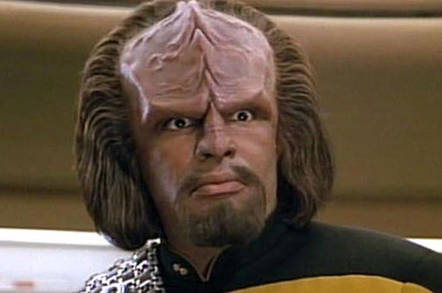 The Language Creation Society is very unhappy about an effort by movie studio Paramount to copyright the language of bumpy-headed Star Trek aliens, the Klingons.

In an amicus curiae brief filed with an LA court, the society claims that Klingon is a "living language" and cannot be owned.

"The greater whole is a living community of Klingon speakers," it argues. "In fact, there are groups of people for whom Klingon is their only common language. There are friends who only speak Klingon to each other. In fact, at least one child was initially raised as a native speaker of Klingon."

At stake is a new movie being developed by a company of Trekkies called Axanar. Paramount and CBS are suing Axanar to prevent the movie from moving ahead and claim that the fan flick infringes on their copyright, including the Klingon language.

The language was in fact invented in 1984 by Marc Okrand for the third Star Trek movie The Search for Spock. Previously actors had just made grunting guttural sounds. But, the Language Creation Society says, although it is "understandable that Paramount might feel some sense of ownership over the creation," the reality is that it has since become a much bigger thing. "The language has taken on a life of its own," reads the society's court submission. The organization liberally scattered Klingon phrases and proverbs in its text to make its point.

Unsurprisingly, the society disagrees and points out that there are plenty of fluent Klingon speakers. Plus of course, plenty of dead languages like Ancient Greek and Latin. Also, apparently, 250,000 copies of a dictionary detailing the Klingon language have been sold.

In short, the idea of granting control over a language that people using to communicate and on which they expand is "qab qech" or a "bad idea", the linguistic lovers argue.

You can find out much, much more about Klingon in their filing if that's your thing. The legal battle between Paramount and Axanar is ongoing, and the society's motion to dismiss the complaint against Axanar will be heard on May 9. ®

Boldly go where no alien tourist has gone before

Revenge is a dish best served with Slurpee and microwave burrito

Companies have each other's back in the Great Patent Wars