But, EU Robo-Commish: we don’t have one. And we don't want one 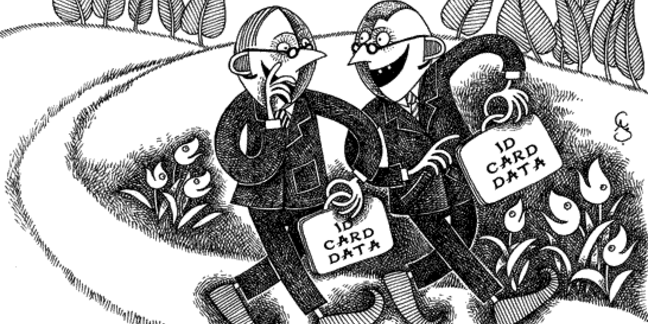 Getting away with it ... Cartoon by Cathy Simpson / No2ID

Analysis The EU’s enquiry into online plantations platforms will recommend a hands-off approach that will delight Silicon Valley. A draft of the enquiry was leaked this week.

The study, part of the EU's Digital Single Market wheeze, also sneaks in one of the EU bureaucrats' top favourite obsessions: national ID cards. You shouldn't be surfing without one, the report suggests.

Logging into internet services using an eID gives the state the ability to see where you're surfing without that pesky bulk surveillance technology, or asking ISPs to retain records.

Platform economics: As you were

The European Commission has noticed that only four per cent of the most used internet platforms come from the EU. And it’s noticed some dangers to competition from dominant platforms, too:

In certain cases, where efficient online platform-markets have become the benchmark, the central role played by a limited number of established online platforms can lead to adverse effects for their users – by they businesses or consumers – through imbalanced relationships and the potential for unfair treatment. They may also potentially limit competitors’ innovation capabilities.

Platforms benefit from network effects, and a vast aggregation of data which arises from operating at scale, and the ability to analyse that data. Critics have suggested that competing with Uber will be impossible, no matter what organisational form a competitor takes (such as a workers' co-op), because Uber has the data on where people already are. Uber will always get there quicker. Once a monopoly, always a monopoly.

“There’s $7bn of VC money that’s betting on Uber being a monopoly market,” Tom Slee, author of What's Yours is Mine: Against the Sharing Economy, told us. “If it isn’t, then the VCs take a bath.”

And the regulatory answer?

Not very much. The howls of anguish from data plantation owners such as Uber and YouTube have been clearly been heard.

“Modernisation should seek to avoid imposing a disproportionate burden on online platform business models. At the same time, in areas where competitive pressures have been increased, deregulation of traditional sectors may offer the most beneficial response to achieve a level playing field,” says the EU report.

Anyone hoping for a more ethical internet will be disappointed. “Voluntary, good faith measures” will be encouraged. (Good luck with that).

Any policing of user-generated content (UGC) – such as "copies" of original songs and movies uploaded onto YouTube by users – which has been made easier by automated filtering, will continue to be voluntary, not statutory. Nor is there a commitment to “notice and stay down”, which depresses prices in the legal marketplace. UGC versions of copyrighted material (such as films and music tracks) reappear, and this allows YouTube to pay much lower rates than licensed non-UGC services such as Spotify (as we explained here).

The EU Commission will instead merely “continue to review the need for formal notice-and-action procedures”, aka wait-and-see. The net result of the recommendations is that it doesn’t move the liability needle for YouTube a single millimetre.

Sources suggest that grumpy copyright holders in the music and newspaper industries have been bought off with hints of a promise of a tax or levy elsewhere. Taxes and levies are a favoured EU solution, but don’t help build a market. If anything, they destroy the incentives to trade IP. And consumers hate them.

“It will give Google the problem of liability and the problem of public relations pressure to do “more” (with no baseline) to deal with hate speech, terrorism, child protection, copyright, etc,” whines the Soros-funded Big Tech group EDRi, incorrectly, in a post entitled “Protecting Google at all costs”. That title surely is a Freudian slip.*

You're too stupid to surf. Get an ID card

Why? Apparently, “for every consumer to have a multitude of username and password combinations is not only inconvenient but becomes a security risk.”

Estonia is inordinately proud of its electronic ID cards, which it introduced in 2012 and the nation’s entire population of ten men and a donkey are apparently happy with it too. It makes them feel digital and modern. Or, perhaps after fifty years of authoritarian rule, Estonians just shrugged and got used to it. But the UK, with its common law tradition, has rejected ID cards time and again.

* Surely if anyone believes it’s their mission to protect Google at all costs, it’s groups like EDRI.