UC Davis chancellor suspended after headlines like this one undo $175,000 online name-scrubbing efforts 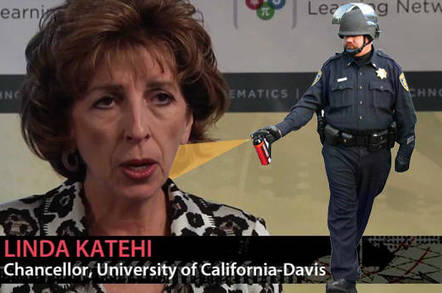 Linda Katehi, the chancellor of the University of California, Davis, has been suspended pending an investigation into the decision to spent hundreds of thousand of dollars improving Google search results for her name, amid a range of other questionable activities.

The decision to put Katehi on paid administrative leave was made by UC President Janet Napolitano, who wrote a two-page letter to Katehi noting she would be suspended for 90 days pending the outcome of a "rigorous and transparent investigation."

The revelation that Katehi's office had spent $175,000 in an effort to "achieve a reasonable balance of positive natural search results on common terms concerning UC Davis and Chancellor Katehi" was dug out by the Sacramento Bee looking into why UC Davis' "strategic communications budget" had jumped from $2.93m in 2009 to $5.47m in 2015.

The events Katehi was seeking to whitewash – when security officers pepper-sprayed sitting students back in 2011 – received nationwide press attention for the seemingly callous way in which the undergraduates were treated. The news that the university had secretly spent hundreds of thousands of dollars trying to remove that reputational stain was similarly covered.

Katehi claimed that she had no idea of the details of a contract with web search whitewashers, even telling Napolitano she was not involved with them. But further digging revealed that to be untrue.

"There are concerns regarding whether you have made material misstatements regarding your role in the social media contracts," notes the suspension letter. "Despite public statements to members of the media, as well as to me, that you were not aware of or involved with these particular contracts, documents prepared in response to a Public Records Act request indicate multiple interactions with one of the vendors and efforts to set up meetings with the other."

Napolitano's letter also puts a spotlight on other concerns over Katehi's behavior, including the employment of her son, her husband and her daughter-in-law by the university.

"Questions have been raised about the employment of some members of your family, including whether employment actions related to your daughter-in-law and son violate University conflict-of-interest policies," the letter notes.

"Your daughter-in-law, who directly reports to one of your direct reports, has received promotions and salary increases over a two-and-a-half year period that have increased her pay by over $50,000 and have resulted in several title changes."

And the letter refers to complaints that student fees have been used for "unapproved instructional purposes" which would be "a serious violation of University policy".

As if that wasn't enough, Napolitano also references a previous scandal in which Katehi, without seeking permission, accepted board positions at an educational publisher and a for-profit university, receiving hundreds of thousands of dollars in compensation.

"As I said when I defended you after you accepted the DeVry Board position… you have done some great work for UC Davis," notes Napolitano. But "given the accumulation of matters that require investigation", she was relieving her of all duties pending investigation.

"I am deeply disappointed to have to take this action," she noted.

UC Davis students have been holding rallies calling for Katehi's resignation for over a week.

"This smacks of scapegoating and a rush to judgment driven purely by political optics, not the best interests of the university or the UC system as a whole," said Katehi's lawyer Melinda Guzman in a statement.

"The chancellor welcomes an independent, objective investigation and a full release of all relevant documents and public records. Make no mistake: we intend to vigorously defend Linda’s professional reputation and her standing as chancellor of the university she loves." ®