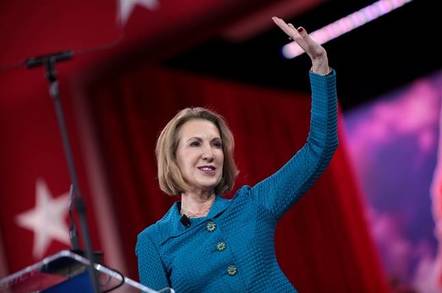 Prepare to get outsourced, America! It's Carly Fiorina

Republican presidential candidate Ted Cruz will announce his running mate at a campaign event on Wednesday afternoon – and the pick to revitalize his flagging campaign is Carly Fiorina.

Fiorina ended her own bid for the presidency in February after a lackluster performance in which she proved herself to be factually challenged when it comes to Planned Parenthood videos and Obama's running down of the military.

She did, however, score a notable strike on Donald Trump in the debates, one of the few candidates to discomfit the Republican front runner.

Multiple sources in Cruz's campaign have confirmed the pick and it makes a certain amount of sense. Cruz seems to have a lot of the Republican evangelical vote behind him but he lacks support among women and has no experience in business.

Fiorina has been selling herself as the person to sort out corporate America, citing her role as CEO of HP. She took the helm of the company in July 1999 and oversaw its merger with Compaq, making it the largest supplier of PCs in the business.

While at HP, Fiorina was a divisive figure, scrapping the egalitarian nature of the company in favor of corporate jets and management pay rises. During her five-year tenure, she offshored 30,000 jobs and oversaw the company's stock price falling 41 per cent and its debt load rising by nearly $2bn.

By 2005, the board had had enough and Fiorina was told to pack her bags and get out. The severance package of $45m must have eased the blow somewhat.

After a rest, Fiorina turned her attention to politics and campaigned for John McCain in the 2008 presidential election. The following year, she announced her intention to run for the Senate in California as a Republican against the Democratic incumbent Barbara Boxer.

Shortly after the announcement, she was diagnosed with Stage 2 breast cancer and endured a double mastectomy and chemotherapy. She didn't drop out of the race and after some fairly bizarre tactics lost the 2010 election by 10 points.

Her 2016 presidential run saw ratings as high as 15 per cent, but she quickly lost the support of voters and was down to single-digit support when she finally called it a day. Now she'll have a shot at the White House with her new partner, and at the presidency if Cruz croaks while in office.

That said, Cruz's chances don't look good. Trump's five-state win on Tuesday made it mathematically impossible for Cruz to get the required number of delegates needed to clinch the nomination in the first round of voting; he's relying on horse-trading at the convention to keep his presidential dreams alive. ®

Apple, Google should give FBI every last drop of user information, says ex-HP CEO and wannabe US prez Carly Fiorina

Come back, Trump, all is forgiven

Fiorina reaching out to the public, one cringe at a time

Forget Hillary, HP's ex CARLY FIORINA 'wants to be next US Prez'