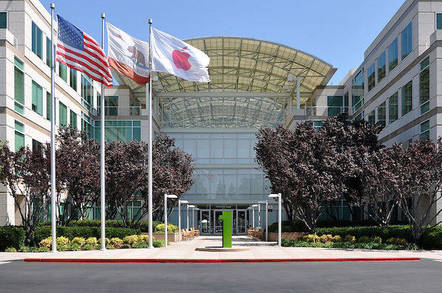 An Apple employee was found dead in a conference room at the iPhone giant's HQ in Cupertino, California, this morning. A gun was discovered nearby.

Cops were called to the One Infinite Loop campus at about 8.35am. Sgt Andrea Urena of Santa Clara County Sheriff's Office described the death as "isolated incident," adding "nobody else on campus or in the public is at risk."

So far no further details are available as to the identity of the deceased nor the cause of death. The case has been handed over to the county coroner.

According to a recording of the sheriff's dispatch call, a person was found bleeding from their head, possibly from a gun wound, and was being escorted out of the building by Apple security staff.

When the police arrived, an Hispanic Apple worker was found dead in a conference room with a gun nearby.

Apple was not available for immediate comment. The company's share price is right now still taking a hammering – it's down 6.40 per cent to $97.7 – after a bad Q2 financials day. ®