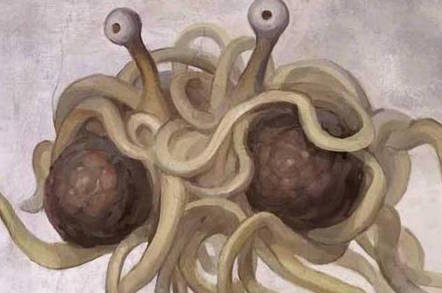 Ireland’s anti-discrimination quango has rejected claims that Pastafarianism is a religion after an Irishman insisted on wearing a colander for his driving licence photograph.

Two followers of the church of the Flying Spaghetti Monster celebrated the first officially sanctioned Pastafarian wedding in New Zealand earlier this month. However, authorities in Ireland, who arguably are still in the final throes of excising religion from public life, have taken a rather dimmer view of the 11-year-old "religion".

Noel Mulryan had brought a claim against the Republic’s Road Safety Authority after it refused a change of address application for his licence back in 2013, after he supplied a photograph of himself in what he claimed was religious garb - ie, a large colander.

A second photo featuring a smaller colander was also rejected, and attracted the incendiary suggestion that “his religious beliefs were a parody and as a result his licence application would not be accepted”.

Mulryan felt compelled to apply to the Workplace Relations Commission for relief from what he felt was religious discrimination, which because he has no up-to-date licence has prevented him from driving for work or pleasure.

The RSA’s response centre on its claim that a review of the core tenets of Pastafarianism, including “we are fond of beer” and “every Friday is a religious holiday”, demonstrate clearly the nature of Pastafarianism as “a parody of religion”.

Adjudication officer Valerie Murtagh noted that, by Mulryan’s own admission, “he does not wear the colander to work nor does he wear it when out socialising but on occasion he wears it at home when he is feeling sad and vulnerable.”

In a shock decision, the adjudicator, declared: “I find that the claimant’s complaint does not come within the definition of religion and/or religious belief and therefore is not covered by the Equal Status legislation.”

Therefore, Murtagh declared, Mulryan could not establish a claim of religious discrimination, and the complaint failed.

Ireland has, of course, been much plagued by religious strife over the years. The tricolour symbolises peace (white) between Gaelic Catholics (green) and Protestants (orange). You can't help thinking that acknowledging Pastafarianism could have further muddied the waters. Or at least resulted in a great big pasta sauce stain right down the middle. ®