Not a challenging course, but still 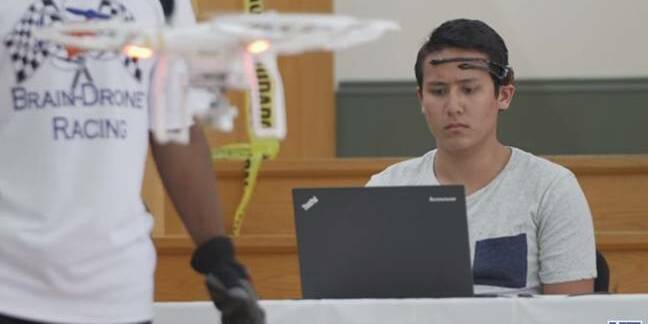 Video Florida has hosted the world's first drone race where the participants eschew joysticks and instead direct the quadrocopters using the power of their brainwaves.

"We're starting a new trend in society," said Juan Gilbert, Chair of the University of Florida's department of computer and information science. "There will be future brain drone competitions. We're starting out with a simple little race right now but who knows where this will go."

The 16 students taking part used the Emotiv headset to control the drones. The electroencephalogram headsets detect brain activity and come with software that tries to translate these signals into action.

Emotiv headsets have been around since 2008, when Intel took an interest in the firm on the grounds that brain control was where computing was going. The early results were mixed – then CTO Justin Rattner had an embarrassing time of it at an Intel Developer Forum that year when the headset failed to work on stage – but things are improving.

That said, the Florida drone race didn’t exactly match the thrills and spills of the first World Drone Prix, held in March. Instead the students gazed at their laptops with Jedi-like concentration and directed the drones to fly a straight course – typically very slowly, and with a heavy gloved handler ready to make sure it didn’t go awry.

Intel sponsored the event, and Chipzilla is obviously trying to get people excited about the Emotiv headsets. While it does seem that the firm has taken brain-computer interfaces forward, there's still a long way to go. ®

Choose your own thrill ride: A Florida slidewire or catching a rocket by helicopter