He really has got his head in the clouds... 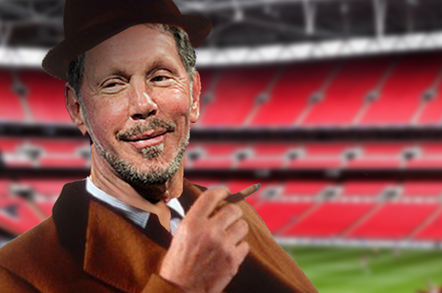 Larry Ellison is rumoured to be mulling a substantial cash injection into a foundering business which has seen itself unable to compete in recent years with more powerful rivals.

No, not Oracle, but Aston Villa, according to the the word on the street and in The Sun, which says that a Brit consortium linked to the US enterprise software firm that is said to be in talks with Randy Lerner, owner of the football club.

The paper said the group had joined the bidding and is in “advanced talks” with Villa chairman Steve Hollis.

The Villa were relegated from the Premier League last weekend, amid repeated calls from fans for Lerner to sell the club.

Villa requires a lot of investment if it is going to compete with the other big names in the Premier League that are bankrolled by rich sheiks or Russian oligarchs - Larry has the necessary ego, and is the seventh richest man on the planet.

Everyone knows Larry loves sport, whether it is investing shedloads into US tennis, or funding a yacht for the Americas Cup. Larry is also a big giver to charidee, and some rather cruel onlookers might say that he’s taken philanthropy to a whole new level with the latest chapter in the book of his life. ®