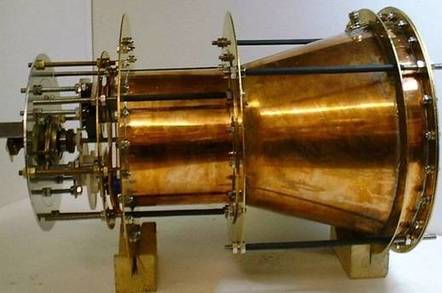 An explanation for Roger Shawyer's seemingly impossible EmDrive has been offered.

The RF resonant cavity thruster was first proposed by British aerospace engineer Roger Shawyer in 1999. It bounces microwaves around within a cone-nosed container, with the container moving in the direction of the cone end.

Despite skepticism from the scientific priesthood – who are adamant that an EmDrive would violate the conservation principle – tests in Germany, China and at NASA have found that the EmDrive produces thrust that could not be explained.

The amounts of thrust produced by experimental EmDrives so far is rather small, almost too small to measure, which is a worry. We're talking about being within the margin of error. It's hoped in future, though, that the technology is powerful enough to nudge the orbit of a satellite.

The promise is of a propulsion technology that enables high speed interstellar travel using minimal fuel. But it can't work if we can't explain how it works, can it?

Now Dr Mike McCulloch at Plymouth University has tried to account for the puzzle by offering a new, and testable, theory of inertia.

The EmDrive's thrust can be predicted (and tested), says McCulloch, by accounting for radiation pressure from Unruh waves. These cause the momentum to increase as the thruster moves. McCulloch suggests the same effect accounts for the anomalies observed when spacecraft accelerate around a planet: they jump.

His theory can be found at Arxiv, here. McCulloch also blogs, and you can start reading here. ®