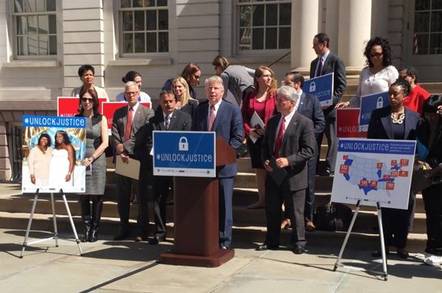 "The debate over encryption is often referred to in terms of privacy and security, with little regard for the impact on crime victims," said District Attorney Cyrus Vance at the launch on Monday.

"Americans have a right to privacy, but crime victims and surviving family members have rights, too – namely, the right to have cases solved with the strongest evidence available. Juries don't just expect that – they demand it, and evidence that used to reside in file cabinets, closets, and safes is today stored on smartphones."

As we saw in the UC Davis case, there are plenty of social media "gurus" willing to take money to try and manipulate social media. So the law enforcement team launched #unlockjustice, a campaign to let the public scream their disapproval of end-to-end encryption.

You can see where this is going. The response to the campaign has not been what the NYPD is looking for.

There are precious few tweets supporting the NYPD, and so far the campaign is looking like a rather dismal failure. But the NYPD is also facing allegations that it stole the #unlockjustice hashtag, as it was already in use by another campaign.

The Friends Committee on National Legislation (FCNL), a Quaker lobbying group, has been using the #unlockjustice hashtag since last year to highlight excessive mandatory sentences being handed out for crimes.

"They're obviously not very good at social media," FCNL spokesman Jim Cason told The Register. "This appears to have backfired in the NYPD's face and brought more attention to our campaign to reform the criminal justice system." ®