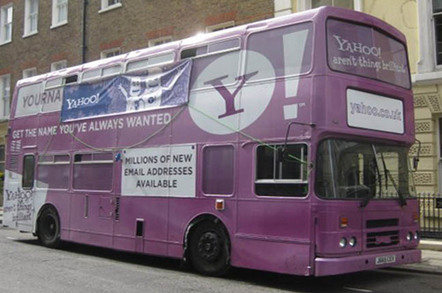 Analysis Right now MailOnline parent the Daily Mail Group is worth at most £2.5bn, and the few content assets that Yahoo! is supposed to be selling, are already worth way more than that. But the issues go deeper.

DMG – parent both of the Daily Mail print newspaper and the massively successful online site Mail Online – has no magic answer to “How to monetise content at scale,” and neither does Yahoo! The result is therefore like the classic tying of two bricks together to see if they will now help each other float.

That’s a bit glib, because in the context of the UK, the Mail does better than all the other newspapers, at this, but not as well as Yahoo – so it’s no rescue. This is more a case of buying Yahoo to get a foot in the US and some help with online, when in fact Yahoo in the US is considered weak in these respects.

The other issue with the Mail offer is that it will require Private Equity money to complete, leaving the stub with a heavy debt load to service.

There remain some fans of Marissa Mayer, the CEO at Yahoo, because she has managed to acquire some good businesses in Tumblr and Flurry, and these are assets which now have a greater value than when she bought them - at results conferences she refers to these and other online businesses as Mavens – standing for Mobile, Video, Native and Social, and by native she means native advertising.

At her results conference in February, Mayer could at least claim that Yahoo did not shrink, but when you realize that 33 per cent of revenue was completely new at around $1.6bn, this means the old business must have fallen by around that same amount, $1.6bn, in order for the entire ship to stand still. If another year passed without Yahoo being bought, then Mayer might be able to offload the old stub of Yahoo, and keep the rest intact, but the Mavens are not enough to keep the content business intact it seems, as investors won’t wait.

The longer-term plan was to keep Search, Mail and Tumblr operating in four core verticals News, Sports, Finance and Lifestyle and geographically in the US, Canada, UK, Germany, Hong Kong and Taiwan. So in theory, a buyer could come from any one of those territories, which is likely what the Mail is thinking.

The difference between the Mail bid and Verizon’s interest, is that Verizon would consider taking on the shareholding which Yahoo has in China’s Alibaba, worth some $25bn. But anyone foolhardy enough to buy that stock, is likely to continue to see it slide as the Chinese economy worsens.

The shift to programmatic advertising and real time inventory auctions may leave these two further behind and the leader in rumours of who will end up with Yahoo, in Verizon, has acquisitions which have made greater steps towards this style of operation, as well as towards a strong smartphone video business.

The other option being talked about is Softbank, the owner of Sprint in the US, and with a third-placed cellular play in Japan. That covers two of the territories, and it might offload or partner in the others.

There are so many possible outcomes here we won’t do our normal thing and predict the winner – but whichever it is, we suspect the bulk of the resulting businesses will no longer be trading under the name Yahoo by the end of this year. And for our money, three bidders are not enough to keep the majority of jobs at Yahoo, or even all of the businesses, even after its recent culls.