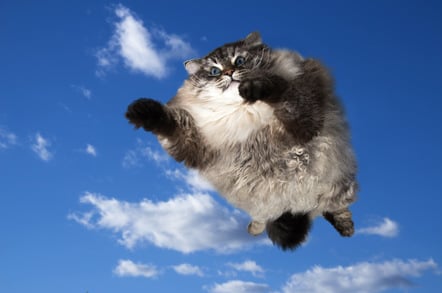 Our recent speculation that it might be possible to hoist 1,000 cats aloft under a helium-filled, stadium-sized sandwich bag and then drop them from 32km to devastating effect appears to be somewhat more than idle Friday afternoon pre-pub musing.

Sensationally, we at El Reg have obtained solid evidence that the US has indeed developed a "Kilocat" weapon, and is preparing to test it over the southwestern Pacific.

Earlier this week, we received a dossier from an anonymous source who claims that the Defense Advanced Research Projects Agency (DARPA), the US Air Force, Lockheed Martin and the black ops division of Wal-Mart have established a secret testing facility somewhere in Nevada, where they're engaged in experimental zoological weapons testing.

Our source provided photographic proof of the process which has, over the last two years, led to the development of a fully-functioning Kilocat prototype. Here, then, is the chilling proof of America's feline WMD capability...

While we might imagine that the Kilocat's destructive payload is obtained by captive breeding or cloning a suitably hardy and aggressive cat strain, the process is actually decidedly old school.

Experts have long known that the western tabby desert wildcat (Felis obstreperis) is among the most belligerent of the cat species, and American pioneer lore is replete with bone-chilling tales of the creature's demonic nature.

In 1843, for example, a pioneer wagon train travelling from Missouri to California passed Scratching Post, Utah, where its members were warned not to venture westwards into the Nevada desert without sufficient protection.

Sceptical of local accounts of vast wildcat clowders preying on lightly-armed convoys, the intrepid bunch set off into the wilderness, never to be seen again. It wasn't until 1986, when an investigative expedition by the University of Nevada Reno discovered a sun-bleached pile of gnawed human bones and fur balls at Purring Sands Gulch, close to Coyote Springs, that the party's grisly fate was confirmed.

Despite the dangers, over time, those living in the wildcats' range developed a herding technique which involved separating a mother and her kittens from the clowder and lassoing them into robust hemp sacks or barrels. 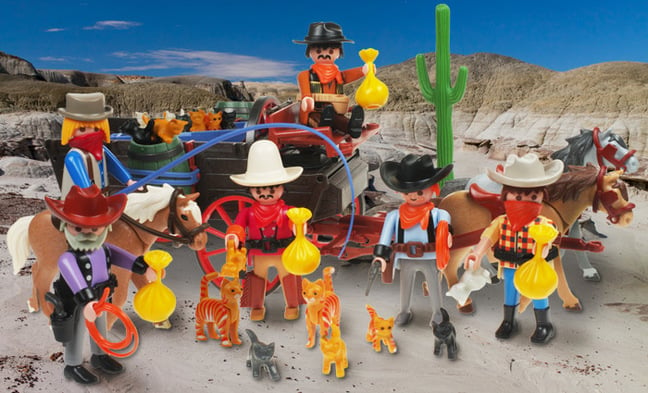 This continues to be the preferred method of collection, even with the availability of modern technology such as net-firing cat-snare UAVs.

The captured animals are delivered directly to the Nevada facility, where they're given a medical once-over and "catified" according to size, weight and the all-important claw length.

One cat from each delivery is selected at random and taken to a sealed laboratory to determine its natural propensity for senseless violence. 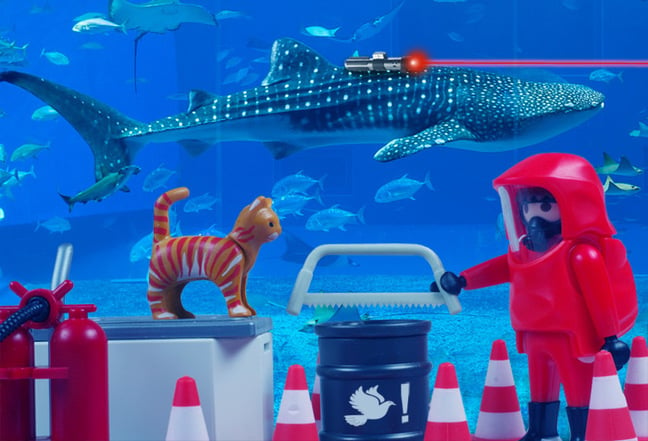 Here we see a heavily protected technician about to saw open a steel drum of live pigeons and throw the cat among them. The results of this testing are generally predictable enough, and we'll leave the carnage to your imagination.

Assuming the batch is up to scratch, the wildcats are now ready for deployment. Quite how they're transported to launch altitude isn't clear, although our source insists they're packed into a modified version of the Bigelow Expandable Activity Module (BEAM). 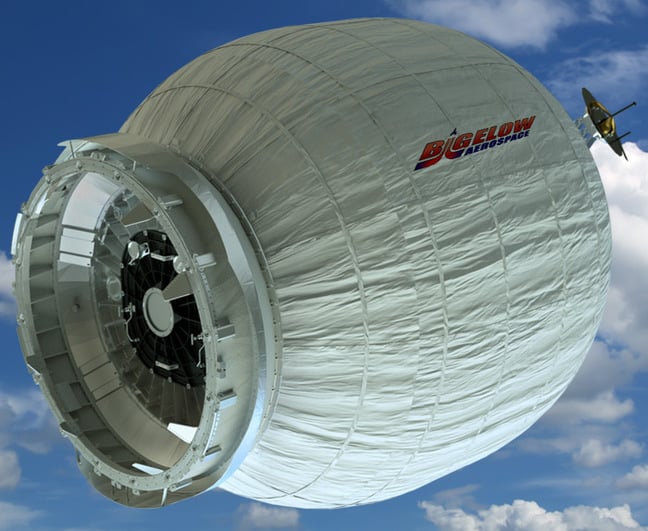 Designed for use as a pump-up space habitat, BEAM's micro-meteoroid and orbital debris protection structure make it resistant to even the most irate feline payload.

The only image we have of the delivery podule is this view of an airlock, as workers carefully carry out the cat-packing, or "encatsulation": 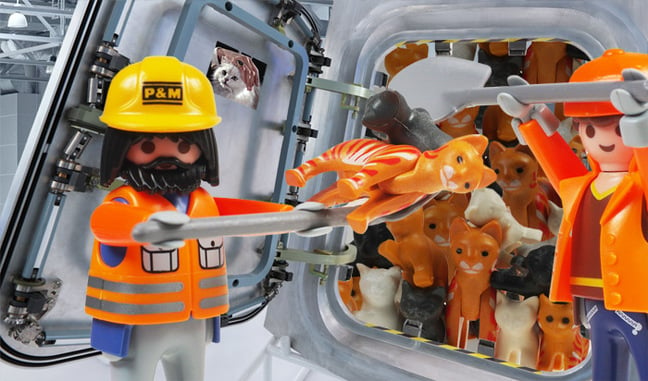 Assuming the Kilocat is indeed a orb-lofted BEAM, here's how we imagine the launch would look, using NASA's heavy-lift super pressure balloon (SPB): 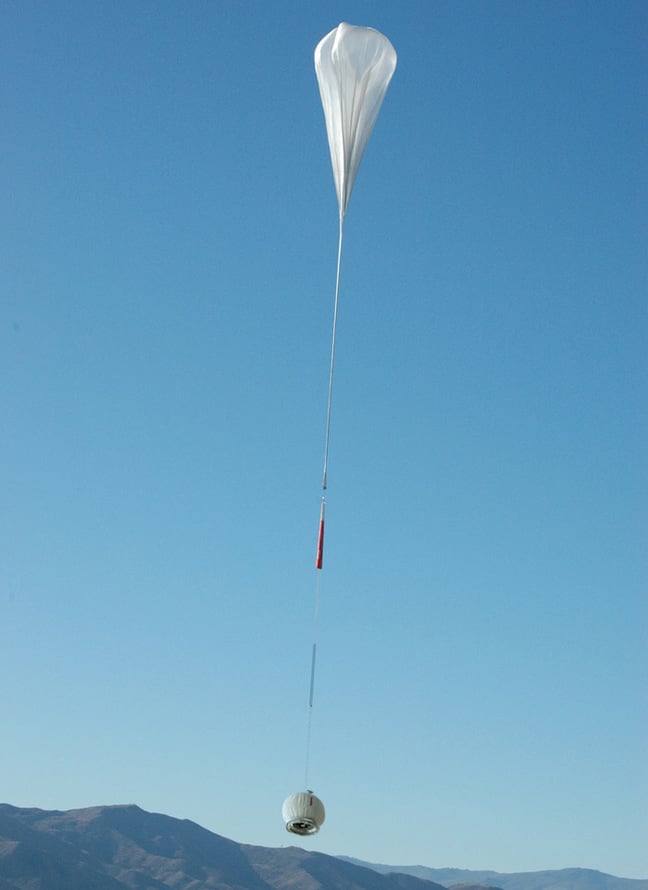 Co-incidentally, the space agency's SPB team is currently in New Zealand, awaiting fair winds for a launch. NASA says that the mission is principally intended to transport the University of California's Compton Spectrometer and Imager (COSI), but our source dismisses that as a cover story.

The word on black helicopter street is that SpaceX has its autonomous recovery barge I Still Love You But I Think We Should See Other People on standby off he coast of New Zealand as a target for the Kilocat test.

The challenge of how to guide 1,000 cats from altitude to a floating platform in the vast Pacific may seem insurmountable, but the solution is in fact very simple: 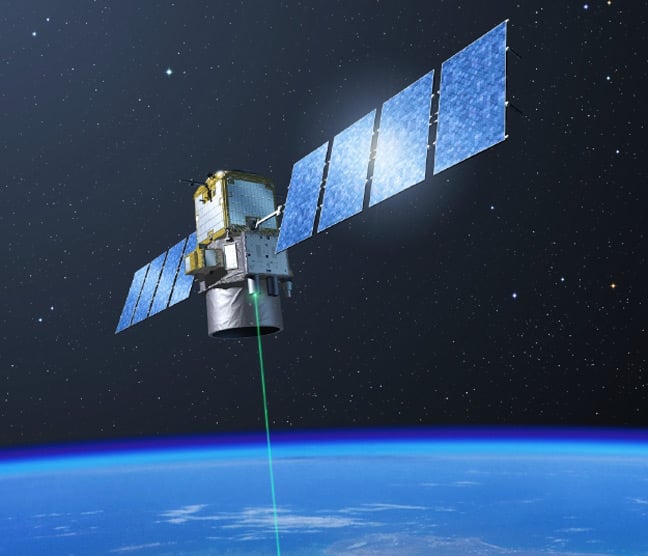 Here we have the CALIPSO environmental satellite, and by aiming its laser at the barge's deck, and simply wiggling the spot around a bit, the cats are presented with an irresistible draw.

So there you have it. We'll conclude by noting that North Korea recently loudly claimed that it had developed a Megacat capability, although experts doubt the Communist state has the resources to feed such an immense payload. ®

You can find all our previous miniature tomfoolery right here.

It's all about expectation violation

Arista-cats nearly out of the bag as redesigned products okayed