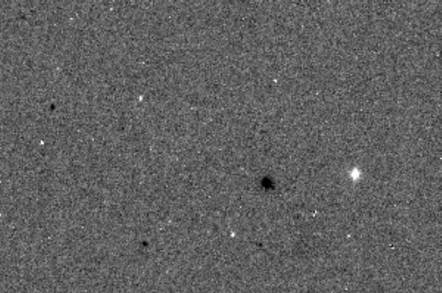 The European/Russian ExoMars craft is doing just fine, says the European Space Agency (ESA), with first light reaching its cameras and everything humming along nicely.

The camera on the craft's Trace Gas Orbiter has been used in anger to capture the image above (or here for those on our mobile site), which came to us courtesy of the two megabits-per-second link the ESA tells us it's been able to establish with the craft. The image depicts “a randomly selected portion of the sky close to the southern celestial pole.” The black blotchy bits are stars.

ESA’s spacecraft operations manager Peter Schmitz says “All systems have been activated and checked out, including power, communications, startrackers, guidance and navigation, all payloads and Schiaparelli”.

“Schiaparelli” is ExoMars key science payload as it will descend to Mars, making atmospheric observations as it goes. Upon landing the Dust Characterisation, Risk Assessment, and Environment Analyser on the Martian Surface (DREAMS) package will try to learn as much as it can about Martian weather in the short time – two to eight sols – it is expected to operate.

ExoMars won't be doing much for the next little while. A course correction in July will be closely-watched, as will its arrival on October 19th. After that the real fun starts!

The ESA's silent on the unexpected bits of booster rocket following the craft and what they might mean for the mission's success. ®