Cinema boss gives up making kids turn off phones: 'That's not how they live their life'

What's the harm in obnoxious people tapping at their phones in a crowded theater? 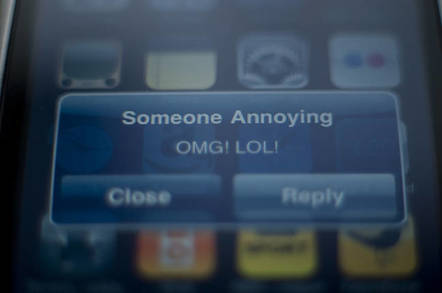 The CEO of AMC Theaters says his company will consider allowing people to text during movies.

In an interview with showbiz mag Variety, Adam Aron said that it wasn't tablets and streaming video services that were keeping millennials out of movie theaters (or for our younger readers, "the place where your parents go to watch the stuff you torrented a week ago"), but rather the fact that they couldn't text while the film is showing.

As such, Aron said his American cinema chain was considering relaxing the rules in certain theaters or showings in order to let the youngsters tap away on their smartphones during the movie.

"When you tell a 22-year-old to turn off the phone, don't ruin the movie, they hear please cut off your left arm above the elbow," Aron said.

"You can't tell a 22-year-old to turn off their cellphone. That's not how they live their life."

This would be an about face from the current rules in most theaters, where patrons are asked to turn off their phones (and remove their Glass headsets) before the film starts in order to avoid distracting others (or pirating the movie) during the showing.

The move is one of several Aron has planned in order to lure younger viewers away from streaming services and back into theaters. He also told Variety that AMC was looking to expand the types of food it offers customers and increase its budget for marketing in hopes of prying viewers away from their PCs and tablets, at least long enough to pay for a movie ticket.

"We need to reshape our product in some concrete ways so that millennials go to movie theaters with the same degree of intensity as baby boomers went to movie theaters throughout their lives," the eminently hopeful exec said. ®