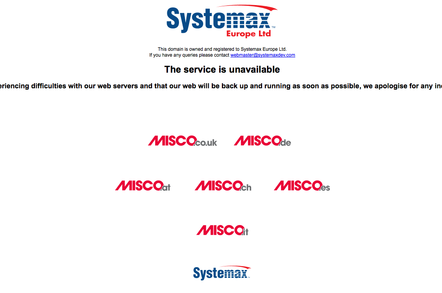 Not wanting to be totally outdone by the recent outage at arch rival Insight Enterprises, online reselling rival Systemax Europe - trading as Misco - has battled its own web demons for the best part of this morning.

The company’s site first fell over at least two hours ago with its Twitter feed acknowledging the worldwide wobble… well sites in the UK, Germany, Spain, Austria, Italy and the Czech Republic.

“Will be back soon. We apologise for the inconvenience and appreciate your patience”.

Several hours and some lost online sales later, the company confirmed the site remained down and that it still didn’t have an expected return time yet pegged.

“We currently do not have an ETA but we have a team working on this,” Misco added around an hour ago.

MISCO UPDATE: Sorry for any inconvenience with our website being down, we currently do not have an ETA but we have our team working on this.

Misco told us a “server outage” was behind the issue, it was not more specific on the technical details. The firm is currently “running the backup to bring [it] all back online”.

Web-based punters have been contacted directly by the sales teams, and Misco is “expecting a return to normal service later today or by tomorrow at the latest”.

Downtime or any disruption to sales is not exactly what the top brass - who are trying to improve the fortunes of the company - had in mind when they were travelling to work this morn.

In the case of Insight, a power outage in Sheffield took down its data centre in the area on 18 March. And on the return of power, a surge in electricity killed the power protectors and knocked the systems offline again.

It was estimated that the UK organisation turns over roughly £700,000 a day online. ®