Talk about pushing the envelope 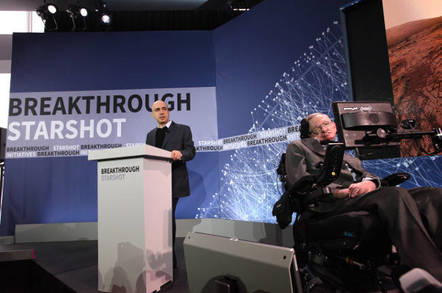 Yuri and The Hawk are gunning for Alpha Centauri (Source)

Famed physicist Stephen Hawking and Russian billionaire Yuri Milner are putting their weight behind a research project to send a tiny spacecraft to another star system.

The Breakthrough Starshot campaign aims to create a craft about the size of a postage stamp and propel it with blasts of energy from an array of laser beams. The tiny craft and its light-powered sail would then accelerate to 20 per cent of the speed of light and make the 25-trillion-mile journey to Alpha Centauri in an estimated 20 years.

"Without new methods of propulsion we simply cannot get very far, not unless we are prepared to spend thousands of years in flight," Prof Hawking said.

The Starshot project will seek to solve the problems previously encountered by light-sail craft by going as small as possible. The stamp-sized craft would be equipped with cameras and sensors, but still be small and light enough to be accelerated to speeds 1,000 times faster than any spacecraft has previously reached.

Milner says that a $100m research and development project will be launched to develop the tiny craft, its sail, and the massive array of Earth-based lasers that would beam energy to propel the craft much faster than solar power could manage.

This isn't the first time boffins have explored the use of lasers to propel spacecraft. NASA has previously examined how an array of lasers could be used to power photonic drive craft.

Along with Milner and Hawking, the project is being backed by Facebook founder Mark Zuckerberg, astronaut Mae Jemison, author Ann Druyan, and physicist Freeman Dyson, who cautioned that the project should not be seen simply as a mission to Alpha Centauri, but rather as the beginning of a new method for exploring space with large numbers of "nanocraft" modules.

Milner also noted that other areas of research – including communications and telescope technology – would benefit from the development of the craft for an Alpha Centauri mission.

Milner has developed a reputation for putting his money behind ambitious research projects. The Russian Billionaire investor has previously pledged his cash to efforts to contact alien life and dramatically extend the human lifespan. ®