Zuck: You're still using non-Facebook websites ... I'll put an end to that 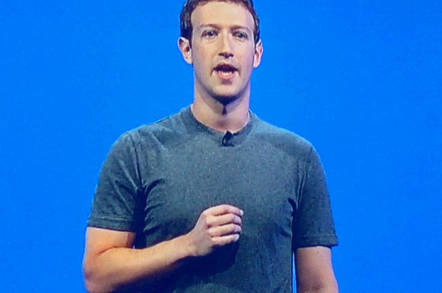 Tomorrow belongs to us

At the opening keynote of the Facebook F8 developer conference, Mark Zuckerberg has outlined his company's plan to get everyone online and hooked on Facebook within the next decade.

"Instead of building walls we can help people build bridges, instead of dividing people we can bring people together – one connection at a time, one person at a time," he said – possibly channeling the Pope's criticisms of Donald Trump.

"That's why our work is more important now than it has ever been before."

Zuckerberg said about four billion people around the world don't have Facebook access internet access. A billion of these can't get access to a network. Zuckerberg showed off the carbon fiber Aquila autonomous drone his engineers are building that can fly for months at a time at 60,000 feet, beaming Facebook internet access to remote areas.

Another billion can't afford the internet, although they are in range of a network. To get these people online, Zuckerberg said he was expanding the Free Basics program, which has 25 million users (and falling) and take it further around the world.

But the remaining two billion are people who have internet access but don't see the point of Facebook. To address this, Facebook will build low-cost telecommunications equipment and open source the designs. Zuckerberg said he hoped telcos will take this tech and pass on the cost savings to subscribers. With lower bills, maybe then people will be enticed onto the web.

The second plank of Facebook's strategy to get everyone onto its social network is the use of artificial intelligence, or rather, throwing AI at people and hoping it impresses them. Within ten years, machine-learning systems will have better-than-human perceptions, Zuck predicted, and they would save lives. Facebook already has an AI engine that can recognize skin cancer lesions as accurately as a doctor, he claimed.

To push this, Facebook has open sourced its Torch AI modules and the Big Sur GPU servers used to power them. In doing this, the social network wants to speed up the deployment of AI across the world.

Finally Zuckerberg said that he believed virtual and augmented reality will have taken over as the way people interact with computers. Gear VR and Oculus are both out (although the latter has shipping problems) and VR allows people around the world to meet and play together in the virtual space.

Within ten years, these bulky headsets will be relics of a bygone age, he predicted. Instead, a normal-looking pair of glasses will be able to run both VR and augmented reality and most people probably won't take them off except to sleep.

Zuckerberg announced that every developer at the show would be getting a free Gear VR and a Samsung phone to use with it, getting the biggest cheer of his speech from the audience thus far.

Having everyone online is nice, but Facebook is a commercial behemoth and its raison d'etre is to sell people's data to advertisers. As such, the company has unveiled its latest tools for developers to do just that.

The number of apps developed for the Facebook platform is up 70 per cent on the year, Zuckerberg said, and this is global. India is the second biggest app developer outside of the US, and Africa is growing very strongly, he said.

Facebook is now adding a permanent video tab to the Facebook app, since 50 per cent of all mobile data is now video. The company estimates that in a few years, Americans will spend 3.4 hours a day watching online videos, and unveiled a 16-camera 360-degree recording device called Surround 360 with open source hardware and software that will be released to GitHub later this year.

Zuck is also expanding its language support for his platform. Only 55 of the 6,500+ languages in the world are supported, and Facebook wants to make the app accessible to everyone in their primary language.

Messenger is the most popular app in America, he said, just ahead of the Facebook app. There are now 60 billion messages a day sent via Facebook, Messenger, and WhatsApp he said, compared to 20 billion a day when SMS was at its peak.

To get even more people using Messenger, Facebook is going to inhabit it with bots – AI software systems that can use Messenger to communicate with Facebook customers. Zuck said businesses would be the first people to use these, and gave the example of CNN messaging people with headlines and then answering requests for more information.

That's cute, but unless Facebook rolls this out very carefully users are going to get drowned in spam. Access controls and privacy settings will need to be easy to use if this is going to work.

Facebook M, the firm's digital assistant, is going to be key to adding in AI capabilities to these bots, and the company is releasing code to allow developers to train their bots using sample conversations, and have the ability to check in with a human assistant as needed.

New analytics tools have also been rolled out today, with People Insights giving developers anonymized, aggregated data on how people use their apps. Customizable Push will allow developers to throw gifs, videos and images at users – again a tool that will have to be used carefully if it is to succeed.

Facebook also wants to get more into managing your identity. Facebook is now the largest single sign-on service in the world, claimed Deborah Liu, Facebook director of product management.

Now Facebook is releasing Account Kit – a collection of software tools that allow people to use their telephone number as a sign-in instead of usernames and passwords, which Liu claimed people hate. Once input, the website texts a code to the phone that's used as a one-time password – very convenient, but a PITA if your phone gets stolen. Account Kit doesn't require a Facebook account to use, but you can bet one will be offered.

Another new function is Save to Facebook, which allows internet users to collect articles, video and other online resources into a single spot on Facebook so they can be revisited later. This will be very handy for some people, and a goldmine for advertisers.

Nearly 3,000 developers crowded into San Francisco's Fort Mason conference hall to listen to the behoodied one and his colleagues expand on these new tools over the next two days. All are going to be told that, for the next ten years at least, the future is Facebook, Facebook and Facebook. ®