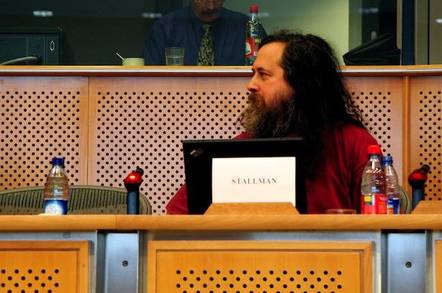 Free Software Foundation president and Gnu Public Licence (GNU GPL) author Richard Stallman has weighed in on the spat over whether Ubuntu can legally include ZFS in Linux, with a resounding “No!”

Stallman has issued a statement he says “.... explains some issues about the meaning and enforcement of the GNU General Public License. The specific occasion for this article is the violation of combining Linux with ZFS”.

Stallman needs to consider that combination because Ubuntu has signalled it will add OpenZFS to version 16.04 of its distribution. The Free Software Conservancy (FSF) argued that the Common Development and Distribution License, version 1 (CDDLv1), under which ZFS is published means it cannot be bolted on to a Linux distribution. Ubuntu disagrees.

Enter Stallman, arguing that “Code under GPL-incompatible licenses cannot be added, neither in source nor binary form, without violating the GPL.” He continues: “if you distribute modules meant to be linked together by the user, you have made them into a combined work, and you must release the entire combined work under the GNU GPL.” It's therefore not possible to release ZFS alongside GNU GPL-licensed code because ZFS is licensed under CDDLv1.

Ubuntu's previously stated that it's sought legal advice and believes it can bundle ZFS without breaching any licences.

Oracle, which since acquiring Sun decides the licence under which ZFS is published, has never shown any inclination to change the licence.

Stallman hopes this will change, writing “... the copyright holders of ZFS (the version that is actually used) can give permission to use it under the GNU GPL, version 2 or later, in addition to any other license.”

“This would make it possible to combine that version with Linux without violating the license of Linux. This would be the ideal resolution and we urge the copyright holders of ZFS to do so.”

So over to you, Big Red. Or would allowing ZFS to be compatible with the GNU GPL threaten your billion-dollar ZFS business? ®