Field technicians want to grab my tool and probe my things

The TV repair man returns for the IoT age 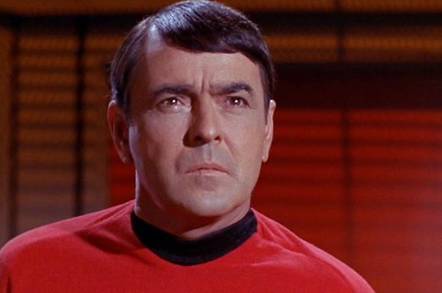 Something for the Weekend, Sir? There’s a woman at the front door. She has come to twiddle my knobs.

Here we go, you’re thinking: yet another puerile SftWS column opening with cheap sexual innuendo. Well, not this time, young Bucky. It’s been four years almost to the day since I first began writing these weekly rantings, so it’s about time I put an end to such smut.

Allow me to put things into their proper context. The woman ringing the doorbell is an engineer. She is carrying a metal toolcase in one hand and a ruggedised laptop in the other. See? Perfectly straightforward. No more innuendo from me.

Not wanting to waste time, she demands that I show her my Things.

OK, sorry, I couldn’t resist – old habits die hard and all that. Let me continue. The engineer has come over to investigate a problem with one of my Internet of Things devices. Things you see? I’m so funny, I could crap myself.

My house is full of IoT devices, from stationary items such as my fridge-freezer to those that trundle around the house by themselves all day, such as my vacuum cleaner. One of them has broken down and refuses to self-reboot. The last thing it did before going offline was to send out a distress message to the manufacturer’s service agent, hence the engineer visit.

I lead the engineer into the living room to inspect the offending IoT device which is sitting lifeless on the floor. She rests the toolbox next to it and, after passing me a torx screwdriver for a few moments, calls up a maintenance manual on the laptop. Her actions leave me no opportunity to make any further cheap sexual innuendo. None whatsoever.

She kneels down and grabs my tool.

Inconceivable though it may seem to Generation Z, when I was little, we used to be visited every now and again by a what we used to call a “television repair man”. He would drive up in a van clearly marked “TV Repairs” and enter the house dressed in a boiler suit. He would throw down rubber mats, tether the TV to a cable leading directly to the Earth’s core and insist that everyone stays well back or, preferably, leave the house altogether and stay in a hotel while he completes the life-threatening process of “re-aligning the electron guns”.

This sounded so exciting, like he was in Star Trek or something. In my childish imagination, I remember wondering whether, if two TV engineers should ever turn up at the same address by mistake, they would spring into a fight to the death like Kirk and Spock. Lord knows what I would have thought if any of them had ever turned up at the house wearing a red boiler suit: a gonner for sure.

Over the years, the TV repair man has vanished. Modern TVs are more reliable and relatively cheap to replace, and the options for fiddling around the back of an LCD, LED or plasma unit are not as varied as they were for gigantic CRT sets. TV repair men retrained as satellite dish installers, then got sick of technology repeatedly ruining their careers and ended up retraining as licensed taxi drivers.

However, the commonplace sight of the suburban electrical maintenance engineer similar to the old TV repair man could be about to make a comeback thanks to the groundswell of interest in IoT devices in the home. As with connected and autonomous vehicles, before we know it, IoT will rapidly switch from magazine-article silliness to real-world implementation in everyday domestic items.

As those of you who already work in the hardware site maintenance sector, the IoT equivalent of TV repair men will be called “field service technicians”. Instead of labelling their vans “IoT repairs”, they will adhere to the modern tech conceit of idiot hipster startup branding that combines an inability to spell with an inexplicably compulsive fetish for dropping vowels – such as TekRpr, GajFix or BggrAyshn.

And they will be in competition with each other in more ways than one. At least the old TV repair man only had to contend with standards such as UHF and domestic current, common to all TV sets. With the IoT, as I’ve mentioned before, there are no standards that manufacturers are prepared to adhere to. Every bloody unit will be using proprietary software components jealously guarded by patents and spewing out radio noise that will conflict with all the other devices in your house. To solve such conflicts, field service technicians can just increase the signal of the devices they have been called upon to fix so that it drowns out everything else.

I can see this ending up with fisticuffs between field service technicians. So perhaps my childish Star Trek-heightened imagination wasn’t far wrong. My advice? Wear a blue or yellow boiler suit and you’ll probably survive.

The engineer in my living room has finished rebooting my IoT device. It was simply due a replacement for a slightly worn hardware component, she tells me. But not to worry, she has updated the firmware and next time this kind of issue arises, the device will contact the maintenance centre to put a replacement on order while messaging me a reminder that a maintenance visit might be due shortly.

This works by the manufacturers keeping a virtual 3D working model of my unit back at the field service centre, the virtual device mirroring the real-world one.

Same as for my self-driving car when the tyre tread is running thin, I think to myself. That’s a good thing. On the other hand, I’ve always hated the way printers force me to replace toner and ink cartridges that aren’t quite depleted. I hope I can choose when and how to replace these things, rather than virtualisation being used as another excuse to extort more cash out of me.

Another professional job done, the engineer sends me my invoice from her laptop and begins collecting her implements. In a plain and thoroughly innuendo-free manner, she asks me for me to hand back the screwdriver.

I gently slip my tool into her box.

Alistair Dabbs is a freelance technology tart, juggling IT journalism, editorial training and digital publishing. He apologises for the terrible gags and hopes not to have offended too many readers. Rather than believing this kind of thing is acceptable, he was hoping to evoke the spirit of embarrassing 1970s double-entendre comedy. Really, he should be chased out of town – to the soundtrack of Yakety-Sax.