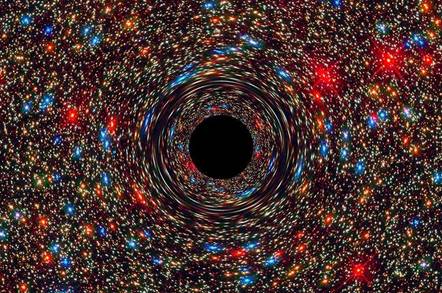 Scientists using the Hubble Space Telescope have spotted a huge black hole with 17 billion times the mass of our sun residing in an otherwise nearly empty backwater of the universe.

Supermassive black holes are typically found at the center of busy crowded galaxies, but this example was found in the sparsely populated elliptical galaxy named NGC 1600 and is ten times larger than current astronomical theories predict. The new black hole isn't the largest ever found – that's in the Coma cluster of galaxies – but it's close.

Lead discoverer Chung-Pei Ma, a University of California-Berkeley astronomer, said that the discovery, spotted 200 million light years from here, was akin to finding a skyscraper in the middle of a farm field, rather than in a big city, and may mean that supermassive black holes are much more common than previously thought.

"There are quite a few galaxies the size of NGC 1600 that reside in average-size galaxy groups," Ma said.

"We estimate that these smaller groups are about 50 times more abundant than spectacular galaxy clusters like the Coma cluster. So the question now is: 'Is this the tip of an iceberg?' Maybe there are more monster black holes out there that don't live in a skyscraper in Manhattan, but in a tall building somewhere in the Midwestern plains."

As for how it got there, astronomers are investigating how this supermassive space oddity came to be. One possibility is that it was formed by two colliding galaxies whose black holes circled each other closer and closer, finally merging into a larger structure.

The team found evidence for this in the way stars move around the black hole. Some circle the structure, while others are moving away from it as if they had swung close to the black hole and were flung out on elliptical orbits.

The black hole was found as part of the MAssive Cluster Survey (MACS), a project to map the stars, dark matter and central black holes of the 100 most massive nearby galaxies: those larger than 300 billion solar masses and within 350 million light-years of Earth. ®