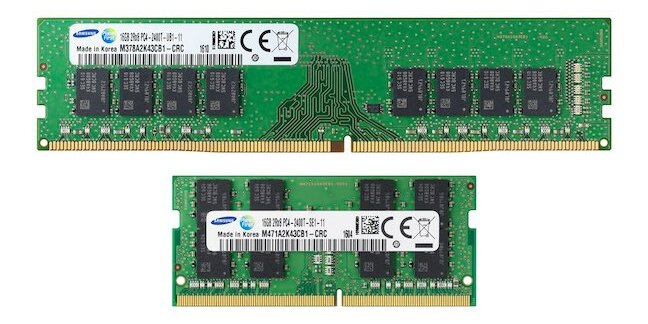 Get that chip off your shoulder and into a server: Samsung's new 10nm class DDR4 in all its glory

Samsung Electronics has announced it's started baking RAM using a “10-nanometer (nm) class*” process and says the 8GB chips it's emitting are the first in the world to be manufactured in this way.

Even if Samsung is building at 19.9999999999 nanometers, the product is impressive because it involves “quadruple patterning lithography” and “ultra-thin dielectric layer deposition”. The former technology is all about doing more at smaller scales, so that chips end up with a higher “resolution” of features. The latter is about getting useful substances into useful places and in the case of this DRAM means getting insulators in place to stop current leaking.

Samsung's promising 10nm RAM in modules from 4GB to 128GB, the former for laptops and the latter for servers. All should hum along at 3,200 megabits per second while using about ten or twenty per cent less power than their bulk and clumsy 20nm predecessors.

128GB RAM modules will be very welcome for those who operate servers at scale, as they will allow lovely loads of memory. Whether that will still matter once storage and memory all-but merge is anyone's guess. While we wait for that to happen, server-wranglers can dream of amazing density, gamers can dream about even faster fragging and laptop-luggers can dream about being expected to work everywhere, all the time, with even battery life removed as an excuse for not answering emails. ®