How about actually answering the questions, presidential candidate asks 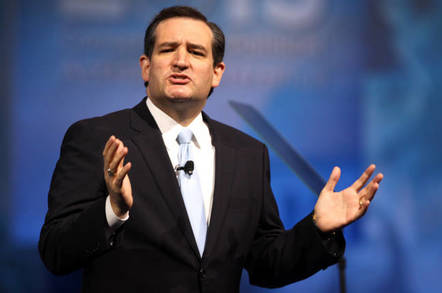 Republican presidential wannabe Ted Cruz, along with two other Senators, has lambasted DNS overseer ICANN a second time for failing to answer questions over its former CEO's ties to China.

In a letter [PDF] sent to ICANN chairman Steve Crocker on Monday, Cruz and Senators James Lankford (R-OK) and Michael Lee (R-UT) demanded answers "to a series of unanswered questions" in previous letters they had sent. These include ICANN's relationship with the Chinese government and the planned transition of the critical IANA contract from the US government to the non-profit California corporation planned for this September.

ICANN recently submitted its proposal to the Department of Commerce to take over the IANA contract, and for that reason, the letter states, "it is imperative that we receive a response to our letter."

The Senators then lambasted the organization for failing to respond, even after it asked for extra time. "After sending our initial request 32 days ago, your staff indicated that you would be unable to respond before March 18. Two weeks has passed since your own self-extended deadline, and ICANN has not only failed to provide a response, but has been unable or unwilling to provide an exact date for when we can expect a complete response to our March 3 letter," it complains.

The letter also takes ICANN's former CEO Fadi Chehade to task for failing to respond to the questions it sent him back in February. Chehade has since left the organization, but in the two months before his departure, he made a serious of controversial decisions and announcements, including the fact that he would front a new internet governance effort by the Chinese government.

The Senators' letter reads: "We would note that not only did Mr Chehade fail to respond to our questions in full, but he disparaged the oversight request during a February 5 question-and-answer session in Los Angeles, California, with members of ICANN's Generic Names Supporting Organization Non-Contracted Party House."

The response from Cruz et al? They resent both letters and asked again for responses. "We ask that you and Mr. Chehadé provide a response to all unanswered questions from our February 4 and March 3 letters as soon as possible, but no later than 9am on Thursday, April 7, 2016," it reads.

ICANN is notoriously poor at answering questions it doesn't want to answer, even when they come from powerful figures.

In 2011, it infuriated the general counsels of the world's largest public international intergovernmental organizations (IGOs) including the World Bank, World Trade Organization (WTO), World Health Organization (WHO), NATO, the OECD and the United Nations when it continually ignored their requests [PDF] to protect their names under new top-level domains.

The issue escalated to the point where the world's governments had to intervene and the program itself was nearly derailed.

In 2013, ICANN also simply ignored increasingly angry letters [PDF] from the Article 29 Working Party, which is made up of the European Union's data protection authorities, over how it was breaking European law with its domain name registration policies.

In both cases, when the pressure became such that ICANN's policy processes came under threat, the organization's staff made changes in the background in an effort to appease them.

ICANN has also been heavily criticized for years for failing to provide any useful information to requests sent through its formal "documentary information disclosure policy" (DIDP) – a system set up in 2012 in response to previous complaints about how opaque its systems were.

In one of the most egregious examples, ICANN refused [PDF] to even provide information about how it made the decision to refuse prior requests for information.

Part of the IANA transition plan sent last month to Commerce includes a provision that would overhaul the DIDP to force ICANN to provide more information about how it makes decisions.

In the case of Ted Cruz and the other senators, however, ICANN is under a little more pressure to provide a response, since the IANA transition agreement requires the approval – or, more accurately, the disapproval – of Congress to pass.

Under an agreement reached between the Obama administration, the Department of Commerce, and Congress, Commerce will inform Congress about the process and provide it for review before it is signed by the president. However, it would require Congress to pass legislation to prevent it from passing.

Although Ted Cruz is unpopular in the Senate, any noise around the deal could cause a delay and push the transition past its current deadline and into the next presidency, where it is far from certain that such a deal would gain approval.