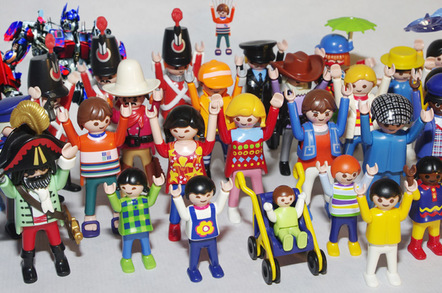 The good burghers of Ottawa have been asked to keep an eye out for a four-and-a-half foot tall Playmobil fireman which was abducted from outside a toy store on Wednesday afternoon.

Debbie Harley, manager of Tag Along Toys in the city's suburb of Kanata, explained that a 20-something male simply walked up to the shop in broad daylight, grabbed his helpless target and "ran like the wind".

Shockingly, the victim suffered decapitation and the loss of one arm as the perp attempted to cram him into a getaway car, but "an unwitting bystander picked the appendages up and handed them to the man".

Harley explained that during the eight years the "unofficial mascot" fireman had been on duty outside the store, he'd been a "big draw". "Kids would come to the store to get their picture taken with it," she said.

Tag Along Toys' owner, Patti Taggart, has reported the matter to the police, and helpfully provided a picture of the missing model, for the benefit of those who might have trouble recognising a giant Playmobil firefighter.

We're pleased to report that despite its loss, Tag Along Toys appears to have other oversized figurines available for snaps with kiddies. These include a pirate and a knight, as seen in a photo on the shop's website.

We at El Reg would like to state for the record that we had absolutely nothing to do with this outrage.

'Driverless' lorry platoons will soon be on a motorway near you