California gets $5m pound of flesh from Samsung, LG, others in price-fix scandal

CRT payout world tour is here, line up for your $25 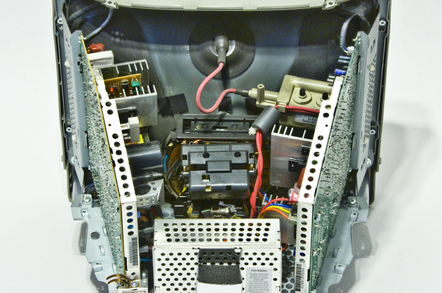 The state of California has levied fines against five electronics giants for gouging consumers on the cost of TVs and monitors.

Attorney General Kamala Harris said the Golden State would be getting a $4.95m total payout from the coffers of Samsung, Panasonic, LG, Toshiba and Hitachi to settle charges of price-fixing.

Harris said that between 1995 and 2007 the group conspired to set an artificially high price for the cathode-ray tubes (CRTs) for use in both TVs and computer monitors. The $4.95m represents the excess profits the five took from Californians over that time thanks to the raised prices.

"These settlements bring justice and relief to California consumers and end the malicious practice of price-fixing by these companies."

Any Californian who purchased a TV or monitor during the 1995-2007 period will be able to file a claim and get a check for $25 or more (depending on what/how many screens were purchased) from the fund. The deadline for filing is June 30. The attorneys involved in the case will, of course, take a $975,000 cut of the fund for legal fees.

The settlement also forces the five companies to undertake additional training and reporting requirements in their display hardware divisions to help prevent or spot future violations of the law.

If this sounds familiar, it is because these same charges have been hanging over the heads of the electronics companies for years from various government regulatory bods. Harris herself began investigating the CRT racket back in 2011.

In the aftermath of the scandal, the display vendors were slapped with a $568m fine by the US government and a €1.47bn penalty courtesy of the EU.

It's not just CRT tubes that got the price-fixing treatment. In a separate case, makers of LCD screens were dinged for rigging prices on those components for a five-year period starting in 2001. ®

Court of Appeal: Can't kick this out, let's have a trial