We read what people had to say, so you don't have to 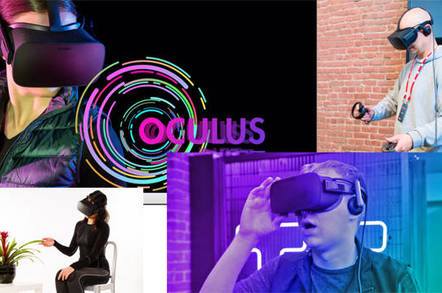 The much-hyped virtual reality headset Oculus Rift is finally shipping to its first customers this week, and the Facebook-owned company dished out a few of them ahead of time to select publications.

The embargo lifted Monday morning and we have waded through tens of thousands of words contained in nine reviews so you don't have to in order to bring you:

The Final Word on the Oculus Rift.

And that word is: Wait.

The VR poster child already had quite a mountain to climb, having announced that it will cost almost double what people expected – $599 (£420). As a number of reviewers also noted, they had to upgrade their PCs to even get it to run. You're looking at a minimum $1,000 (£700) spend for hardware.

So before anyone even gets playing, the Rift was going to have to blow people's socks off to get a great review. And in that it, um, failed to do so.

If you are going to read one review, we recommend the article by Wall Street Journal's Geoffrey Fowler. It is comparatively short, to the point, and written from the perspective of actually thinking about buying and playing the system.

And his verdict? "Oculus Rift is the 2016 product you hope your neighbor buys."

He hits home best with this point: "While the Rift sometimes made me smile or duck, I never laughed, cried or felt moved, like I have with many plain-old movies." In short, it lacks magic.

His sign-off: "It's Day One for the Rift, and I'm already ready for Version Two."

At 1,500 words long, it was a fairly lengthy review. But that was nothing compared to the other reviews that have confused hype with the need to write lots and lots of words. If there is a Bat Signal for judicious editors, now is the time to turn it on.

The longest we found was no less than 4,500 words long. An absolute nerdy snooze-fest of an article on Polygon (Polygon? Yeah, it's the games arm of Vox Media).

Quite why Polygon imagines people would want a lengthy history of the (frankly not that interesting) Rift story before getting into a review is beyond us, but there it is. But wait, before we get into things, let's also have a full spec rundown...

The Rift's head-mounted display features a resolution of 1200 by 1080 per eye, with a 90Hz refresh rate. That means that, for your experience to be comfortable, your games need to be running at 90 frames-per-second or higher. The recommended specs for the Rift, as specified by Oculus, are an Nvidia GTX 970 or AMD 290 GPU or equivalent, and Intel i5-4590 or greater (or equivalent), 8GB of RAM or more, a compatible HDMI 1.3 video output, and two or more USB 3.0 ports. The Rift also requires Windows 7 with Service Pack 1...

Sorry, we passed out there for a second.

While the headset feels fine over glasses once you get everything situated, the act of putting it on and taking it off while wearing glasses remains a consistently awkward affair...

Nope, went again. You were saying something about the headset?

Three thousand words later and here's what you need to know: "There's a lot here to sample but it's not likely to blow you away."

Some of the publications really got their graphics departments to go to town: the equivalent of writing over 3,000 words but in a much more digestible format.

CNet, god bless it, went to enormous trouble to create a whole cyberscape of an article including short video clips and a parallel review – one covering the future of VR and one covering the Rift reality – to make a simple point: the product is just not there yet.

There is something unintentionally hilarious about reading the floating thoughts of future possible worlds, only to be brought down to earth with a bump when the actual review kicks in.

The lenses fill with light. It feels like I'm wearing a set of ski goggles attached to a baseball cap ... Sometimes, I want to take off the helmet. To feel the wind on my face. But as soon as I rip it off, I'm no longer a bird. I'm just a dude, sitting in his apartment, with sweat on my brow.

You can almost sense the desperation in the reporter as he realizes the dream he's been sold by Zuckerberg for over a year actually amounts to little more than bumping into furniture in your living room like a blind incontinent dog.

"You simply must try the Oculus Rift. It's breathtaking," he argues unpersuasively. "I just wouldn't buy one right now – and there's no reason you should feel the need to, either."

Possibly the worst review comes courtesy of the Verge – which continues its solid path of writing uncritical glowing nonsense about any product that corporations are kind enough to deliver to its offices.

It's as damning a case against "me journalism" as you will find anywhere. Nearly 3,000 words of uninteresting personal insight, a twitter feed of an article, complete with a lengthy unboxing description that is literally duller than watching paint dry.

The all-black headset is downright understated by gaming hardware standards, with a front of smooth rubber, sides coated in coarse cloth, and lenses surrounded by a web of lycra...

Want an idea of what lies in store for you in this review? This sentence is as good a summary as anything: "The main headset menu exists in a stark modernist room with a rumpled and totally incongruous carpet in the middle, a weird bit of skeuomorphism that's just substantial enough to feel like it ought to be personalizable."

The review gives it 8 out of 10. Which, applying the usual Verge -4 balancing score means it is really 4 out of 10 (would the Verge actually be giving something 13 out of 10 if it was actually good? Only time will tell).

Ah, the worthy but dull ArsTechnica.

This one is also horribly over-written, coming in at 3,800 words, only 150 of which are worth reading. These are they:

In practice, though, wearing a Rift feels like being surrounded by the biggest monitor you've ever used.

While it's perfectly comfortable to look at objects in the apparent middle distance on the Rift, things get worse at the extremes. At far distances, objects can descend into a muddy, blurry mess much more quickly than on a high-res monitor.

Developers are still struggling to figure out what works and what doesn't in this brave new world.

For now, I can't identify a single 'killer app' that will instantly sell skeptics on the Oculus Rift's virtual reality gaming over simple screens.

Once you get past basic functionality, though, the Oculus app shows a worrying lack of features ... This and other early product issues make the Rift feel very much like the first-generation product it is ... You're probably better off waiting for time and competition to drive the performance up and the price down.

OK, we've still got reviews from Gizmodo, Techcrunch, USA Today and Gizmag to go. Let's see if we can boil them down to one sentence each:

Gizmodo: "You should wait for next week's reviews of the HTC Vive, which has a headset with similar specifications to the Rift."

Techcrunch: "For most people, buying the first iteration of a company's product is a bad call. I have an uncharged Apple Watch on my wrist right now which continually reminds me of this."

Gizmag: "I didn't feel the slightest hint of motion sickness in Eagle Flight, The Climb (where you're scaling a mountain in first-person perspective) or any other Rift game."

USA Today: "Sam's reaction was very different and portends a positive reception for Oculus: 'Oh my God, this is awesome, this is sick!'"

Sam is the reporter's nine-year-old son.

In short: don't be an idiot and spend $600 on a first-gen Oculus Rift. Facebook paid $2bn for the company, so it will get to at least a third version. Plus lots of other competition is on the way. Let the market do its work.

If you must spend $600, upgrade your PC in preparation for version two. ®