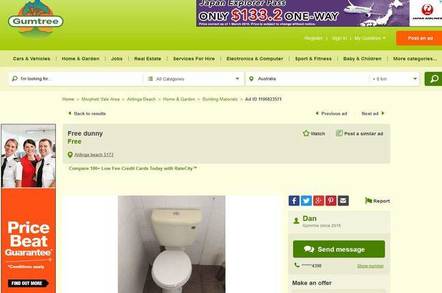 Malware expert Jerome Segura says Australia's most popular classifieds site, Gumtree.com.au, was serving the world's most capable exploit kit to some of its millions of monthly visitors.

Segura says attackers hacked a Sydney legal firm and spun up a legitimate-looking subdomain from which to host the exploit infrastructure.

From there they flipped between legitimate and malicious advertisements to confuse ad market vendors.

"The rogue advertisers simply lifted the company logo and some text from their website to create what looks like a typical ad banner," Segura says.

"They then approached ad networks and pretended to want to advertise under the disguise of the victims they abused.

"By alternating between clean and malicious versions of the same ad banner, these crooks can dupe the ad industry and carry out their attacks in stealthy ways."

The attack will not be served when sandboxes and security tools like network packet capture are detected, in a bid to delay detection and subsequent take-down attempts.

It is unknown how many visitors were exposed, and what malware was dropped on those who were infected.

Users most at risk are typically those running un-patched machines chronically insecure code like Internet Explorer, Adobe Flash or Java.

Those users who are victim to Angler, the most capable and popular of the dynamic exploit kit market, can expect to be infected with malware including ransomware and banking trojans.

Malvertising continues to ruin the reputation of popular websites and drive visitors to use advertising and script blockers.

The attacks are so successful because it exploits weaknesses in the global online advertising structure where high-pace and low-profit margins leave little room for complex buyer and content integrity checks. ®

Oh, and there's no such thing as a 'gun tree'

Gumtree 'fesses up to breach and personal information leak

UPDATE Email addresses, names and phone numbers accessed, but only in Australia