Cosmic bonks, breakups led to birth of Saturn's moons as dinos died out 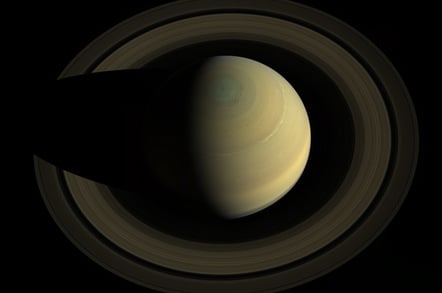 Had dinosaurs had telescopes, and the wherewithal to use them, they could have seen a series of cosmic prangs around Saturn that created new moons.

As far as we can tell, Saturn has 62 moons in orbit around the gas giant all moving in different planes, as well as the planet's famous ring systems. A team from the SETI Institute and the Southwest Research Institute in Colorado has been tracking these moons and just discovered [PDF] that some of them were very recently formed.

"But that fact allows us to use computer simulations to tease out the history of Saturn's inner moons. Doing so, we find that they were most likely born during the most recent two percent of the planet's history."

By mapping the motions of the moons, and then looking at where they are now and would have been in the past, the team spotted that three moons – Tethys, Dione and Rhea – aren't following their expected path.

Saturn has a huge effect on its moons but these three, and a number of smaller inner moons, were behaving in a way that suggests they are relatively recent additions to Saturn's crowded family.

Due to its huge size, Saturn's gravitational pull is so strong, it causes geological activity in its moons. This was shown when the Cassini probe passed the moon Enceladus in 2005 and spotted watery geysers spouting from its south pole as Saturn's gravity kneaded the moon's core.

The planet's evidently powerful pull, however, did not set Tethys, Dione and Rhea on their orbits, suggesting the satellites were put there by some other means – such as other moons crashing into each other and the debris forming new tiny worlds.

“The question arises, what caused the recent birth of the inner moons? Our best guess is that Saturn had a similar collection of moons before, but their orbits were disturbed by a special kind of orbital resonance involving Saturn’s motion around the Sun,” said Cuk.

"Eventually, the orbits of neighboring moons crossed, and these objects collided. From this rubble, the present set of moons and rings formed.”

It must have been a colossal collision, which may have been visible from Earth. If only we had been around to see such a sight. ®