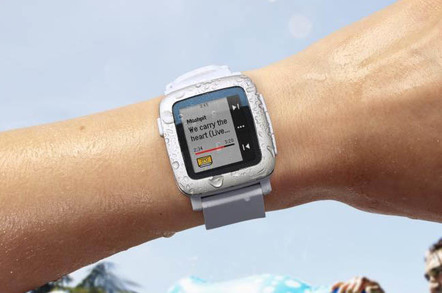 Smartwatch trailblazer Pebble is laying off a quarter of its staff to refocus on the fitness segment of the wearables market.

Pebble has raised some $50m over the past year, with $20m coming from a Kickstarter campaign, but hasn't shipped any new kit since the round last September.

In retrospect, we can see that the recent firmware gave an indication of Pebble's direction: it included a resource-hogging Health app that can't be deleted.

In an interview, founder and CEO Eric Migovsky confirmed that 40 of Pebble's staff would be let go this week.

Pebble began life as a Kickstarter-backed startup, raising over $10m for its first watch four years ago. The Pebble's open API and long battery life made it a favourite for hobbyists. But all smartwatch vendors are struggling to persuade the market they're relevant, and most are richer than Pebble.

There were fewer than 3 million Android Wear activations before Christmas and it's unlikely to hit 5 million before the the end of the year. Apple's much-hyped watch is reckoned to be selling 3 to 4 million per quarter, even with the world's mightiest marketing machine behind it. Only activity trackers are doing well, with Fitbit going gangbusters. It more than doubled its revenue in 2015 to $1.8bn, and added 18 million activations in 2015. Not all Fitbits stay worn, though.

A request for comment had not been fulfilled at press time. ®