You won't prosper with a weightless economy 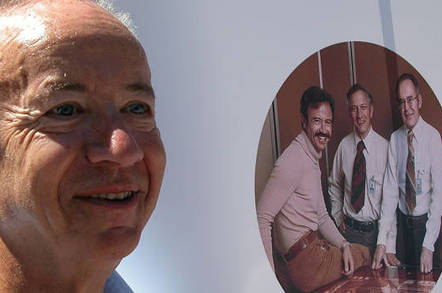 Analysis A few years ago, Andy Grove took the Davos crowd to task. The received wisdom at the time – and it still is – was that America's future was as a "knowledge economy."

It was 2010, and the former Intel CEO lamented that Foxconn employed more people – 800,000 in total – than Sony, Intel, Apple, Dell, Microsoft and HP combined.

Grove was fed up with being told that prosperity would come if the US continued to export jobs and manufacturing skills. And that the future was startups. This was a load of rubbish, he pointed out in a comment piece.

The lesson Grove had learned at Intel was that success was all about scale. As soon as a country loses its high-tech manufacturing base, it forgets how to do many things, and loses its ability to scale in a new marketplace. The spoils go to those who retain a competitive manufacturing base.

TVs were a good example, Grove wrote. Princeton economist Alan Blinder had written that the absence of TV production in the USA, as TVs became a low cost "commodity," was a good thing.

"I disagree. Not only did we lose an untold number of jobs, we broke the chain of experience that is so important in technological evolution. As happened with batteries, abandoning today's 'commodity' manufacturing can lock you out of tomorrow's emerging industry."

He compared it to a condemned engineer fixing a faulty guillotine, so it successfully chops off his head.

"Without scaling, we don't just lose jobs – we lose our hold on new technologies. Losing the ability to scale will ultimately damage our capacity to innovate."

Grove was sympathetic to the mixed model of free markets and strategic prioritization that Asian companies used, but with a more corporatist model, where the governments choose winners. He suggested imposing levies on manufactured imports, with the money raised being doled out on strategic loans.

The lessons to be learned from these eras of post-WW2 growth are ambiguous at best. There was lots of catch-up and lots of low-hanging fruit for Asian economies looking for growth. Their domestic markets were getting white goods (large electrical goods like refrigerators) and new technology for the first time, and for a while, everyone was happy.

Central planning during an early phase of industrial development – deciding where the roads and power stations go – is much less controversial than government involvement during later stages of development, when the giant industrial conglomerates have become uncompetitive and enjoy a cozy relationship with ministers.

And it seemed that no sooner had one economy (eg, Japan) been anointed then it fell into a slump. In recent years another model, the Korean chaebols, have hit a limit in the face of Chinese competition.

But what Grove – who died this week aged 79 – railed against has even more resonance today than it did six years ago, before "Uberization."

Donald Trump said: "Everybody does it. We don't do it and we do nothing about it. We're losing a lot of our very good jobs."

The billionaire demagogue wants a 45 per cent levy imposed on Chinese imports. Today, there's no shortage of people willing to give that a hearing. Although it is hard to see how that could create any instant results. The short-term beneficiaries would be Korean or Japanese exporters, rather than domestic US manufacturers.

Here, Sir James Dyson has echoed the warning. Dyson too has lamented the wonk-babble that infests innovation policy, taking aim at Cameron's crush on "Silicon Roundabout," (ironically named, presumably, for its complete absence of silicon). Dyson is proof that you can stay competitive in a ferocious global market if you invest wisely in high tech manufacturing. Dyson is booming in China.

"All of our IP, patents, inventions and technologies are generated in the UK. They create highly valued, well-paid British jobs [and] most of the taxes we pay in the world are paid in Britain," Dyson CEO Max Conze could boast [paywalled] this week.

So we could do worse than pay more heed to Dyson's advice: better retention of engineering graduates, strong IP protection, and disentangling ourselves from Brussels regulations designed to featherbed Europe's corporations.

The moral to this story: don't sleep on the same floor as your Roomba