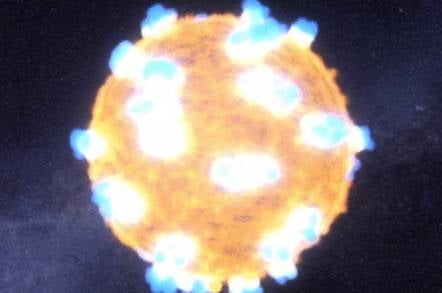 The Kepler space telescope is best known for its planet-hunting prowess, but in a paper just accepted by the Astrophysical Journal it's racked up another first: sighting a shockwave ripping a star apart as it goes supernova.

Called by boffins the “shock breakout”, the shockwave is the “bounce” that happens when the star collapses, just before the huge explosion that characterises supernovae.

It's an important part of our understanding of how heavy elements form, because supernovae provide the energy that assembles hydrogen and helium into heavier atoms.

The wave is really moving: it travels through the star at about 30,000 km per hour.

The paper, here at Arxiv, explains the observations, made by Kepler during 2011 when the team led by Peter Garnavic (University of Notre Dame in Indiana) were observing 500 galaxies.

Dr Brad Tucker of the Australian National University (a co-author of the paper) explained the shockwave was long predicted in astrophysics theory, so they knew what they were looking for: an early signal from the shockwave.

“There's a quick brightening in the first moment of explosion,” he said, “this huge extra light that fades befor you get the normal explosion.”

In the Kepler data, Tucker said, “we see this distinct extra feature – a wave that peaks just after time zero, then slowly fades over a few days.

“Physically, it looks exactly like a wave – it comes with a wave-front and dies away.”

And, Tucker said, the shockwaves seen in the Kepler data were in keeping with “the physical mechanism of a core-collapse supernova: gravity keeps condensing the star core (towards either a neutron star or a black hole) and when that finishes, it bounces off.

“The bounce ripples through the star, and that's what causes it to blow up.”

Even so, once the collapse begins, the star's stuff inrushes so fast that “you're talking about minutes to maybe an hour” before it hits the limit and generates the shockwave.

That's one reason, Tucker told The Register, that the process hasn't been seen before.

“If you monitor from the ground, you have the sun, the rotation of the Earth, clouds, weather – you might only see something once per night.”

That's what made Kepler vital to seeing the shockwave: “Kepler was monitoring the same patch of sky every 30 minutes”, Tucker explained.

“It doesn't download all of its pixels, because that's too much data for its bandwidth,” he continued – so the team had to get time for a specific supernova-hunting mission.

“What we had to do was select 500 galaxies and hope we got a supernova.”

In a normal galaxy, he said, supernovae will occur every 100 to 200 years, so a year-long mission watching 500 galaxies “stacked the deck” enough to make it likely one would be observed.

Interestingly, the smaller of these didn't show a shockwave. According to this NASA http://www.nasa.gov/feature/ames/Kepler/caught-for-the-first-time-the-early-flash-of-an-exploding-star release, that might be because it's surrounded by gas that obscured the event.

Tucker added that the repurposed K2 mission should catch more such events, since he said it will be able to watch thousands of galaxies instead of a select few.

NASA has published a video impression of the event at YouTube (below). ®