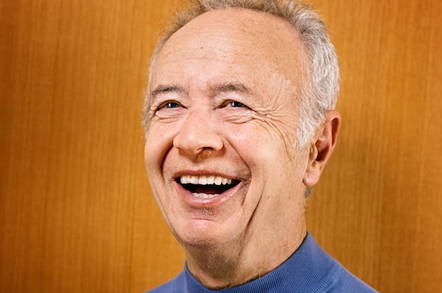 Grove's story is in many ways an American classic. Born András István Gróf in Hungary in 1936, Grove was Jewish. He and his mother survived World War Two by hiding under assumed identities. His family then fled the failed Hungarian revolution of 1956, which saw the Soviet Union crush attempts to overthrow its puppet regime.

Having survived Nazism and Communism, Grove's family migrated to and flourished in the United States. Within years the young man had learned English, earned a bachelor's degree in chemical engineering, added a PhD in the same field and then scored a job on the bleeding edge of science and industry at Fairchild Semiconductor.

At Fairchild Grove rubbed shoulders with Robert Noyce and Gordon Moore, respectively Fairchild's founder and R&D chief. In 1968 Noyce and Moore left Fairchild to found Intel. Grove, by 1968 Moore's assistant, was present at the company's founding and was hired as employee number one.

In Intel's early years, it mostly made memory. But by the late 1970s the company saw margins falling in that field and made a move for the central processing unit market. Grove was at the heart of that decision, as by 1979 he was the company's president, a position he held until 1997.

By 1987 he was CEO, a post he held until 1998. During that time Intel's x86 architecture came to dominate the computer industry, thanks in part to IBM's decision to base its PC design on Intel CPUs but also because Grove made sure Intel cranked out excellent product. During his tenure as CEO Intel moved from the 5MHz 8088 that powered the IBM PC to the Pentium II that introduced the Celeron and Xeon sub-brands Intel still uses today.

Grove was also cunning enough to build the “Wintel” alliance with Microsoft that served both companies very well and arguably shaped the computer industry as much as either company's technologies.

Intel grew to a market capitalisation of US$197 billion during his tenure as CEO and became one of the world's ten most valuable companies. Revenues went from $1.9bn to $26.7 billion on his watch.

Grove was also a notable author, whose tome Only the Paranoid Survive: How to Exploit the Crisis Points That Challenge Every Company was a best-seller. The book remains influential inside Intel: your correspondent has heard Intel staffers mention its philosophy of actively working to prepare for change as a motivating force behind its product development efforts. We've heard the Xeon-D cited as one such example of Grove's influence: Intel saw ARM servers coming and decided it had to retaliate first with a server-class CPU that offered high density and low power requirements. The Xeon remains the jewel in Intel's crown.

In 1998, Grove stepped down as CEO to treat prostate cancer, but remained as Intel's chair until 2005. In retirement he made many philanthropic contributions to a number of causes and contributed $26 million towards the City College of New York's Grove School of Engineering.

Grove is survived by his wife, Eva, to whom he was married for 58 years, two children and eight grandchildren. ®