Verizon: We're sick of waiting for the FCC, so here's our 'net neutrality' 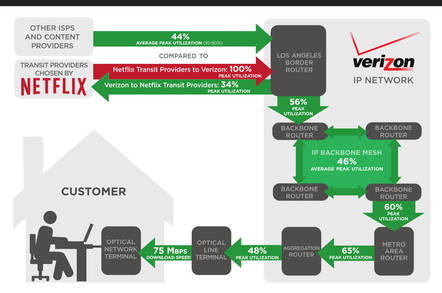 Yes, the same people who said this once upon a time...

Verizon has laid out its own set of net neutrality rules it will impose – regardless of whether the FCC keeps its grip on America's broadband service.

General counsel and executive VP for public policy, Craig Silliman, said Verizon would adhere to a set of rules on its networks, including policies against throttling, paid prioritization, and blocking lawful content.

"We can support these rules because we believe they are fair, even-handed, good for consumers and essential for us and others to thrive going forward," Silliman said.

The policies come as the FCC continues to battle with US Congress over the commission's authority to impose Title II restrictions on ISPs: Title II rules were designed to regulate phone line services; some say they can apply to broadband providers, others disagree.

A Washington DC appeals court is set to rule in the coming months on a challenge to the FCC's authority over ISPs and the watchdog's ability to apply net neutrality control.

Silliman, whose company previously saw the FCC open internet rules thrown out in court, argues that Verizon itself stands to gain from net neutrality provisions, due to its extensive investments in building a content network.

"We have invested billions in businesses that depend on the ability to reach customers over the networks and platforms of others," Silliman wrote.

"These investments would be at risk without an open Internet. Now more than ever, we see protecting an open Internet as a business imperative that is inextricably tied to our future success."

Verizon isn't exactly in the FCC corner on the open internet issue, however. The telco has firmly put its backing behind congressional efforts to limit the FCC's jurisdiction over itself and other service providers.

"In the past, we have criticized the FCC for applying outdated rules to the fast-moving Internet ecosystem. We still think that's true, but let's be fair: Congress hasn't updated the FCC's toolbox for over 20 years, so the FCC is working with the only tools it has, however inadequate," Silliman wrote.

"Congress can give the FCC the tools it needs to do this properly and on a legally sustainable basis. It should do so."

Meanwhile, FCC boss Tom Wheeler has been making the case in Washington DC to keep the Title II protections in place, noting that the rules have hardly been detrimental to carriers since being passed last year. ®