70 years later, Murray Leinster's disaster scenario is the internet you know and love 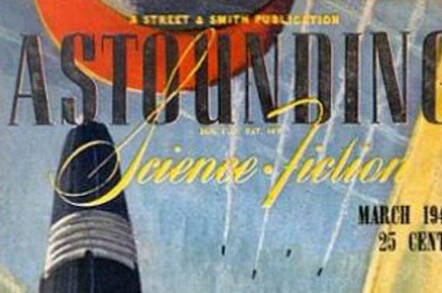 Analysis Buried deep in the pages of the March 1946 issue of Astounding Science Fiction magazine sits a short story by Murray Leinster that, 70 years on, has proven a remarkably sharp prediction of both 21st century consumer technology and culture.

One of two pieces contributed by Leinster, a pen name used by author William Fitzgerald Jenkins, A Logic Named Joe [PDF] tells the story of a humble repairman who finds himself scrambling to stop a machine that has become a bit too good at helping people.

Though Leinster never achieved the notoriety of other science fiction visionaries such as Asimov or Philip K Dick, A Logic Named Joe has been recognized by, among others, the Computer History Museum as "one of the most prescient views of the capabilities of computers in a network."

In the story, Leinster envisions a future in which every home is equipped with a "logic" device that serves as both a reference source and entertainment box. Each logic connects to a "tank" where huge stores of data are kept. In Leinster's own words:

You got a logic in your house. It looks like a vision receiver used to, only it's got keys instead of dials, and you punch the keys for what you wanna get. It's hooked in to the tank, which has the Carson Circuit all fixed up with relays. Say you punch 'Station SNAFU' on your logic. Relays in the tank take over an' whatever vision-program SNAFU is telecastin' comes on your screen ... But besides that, if you punch for the weather forecast or who won today's race at Hialeah or who was the mistress of the White House durin' Garfield's administration or what is PDQ and R sellin' for today, that comes on the screen too.

The story goes on to tell how "Joe," a rogue logic with a slight manufacturing defect, becomes self-aware and resolves to provide his owners and all other "logic" users with whatever information they require. Leinster says of Joe:

Joe ain't vicious, you understand. He ain't like one of those ambitious robots you read about that make up their minds the human race is inefficient and has got to be wiped out an' replaced by thinkin' machines. Joe's just got ambition. If you were a machine you'd wanna work right, wouldn't you? That's Joe. He wants to work right. And he's a logic, an' logics can do a lotta things that ain't been found out yet.

This, in turn, leads to logics around the city providing tips on everything from poisoning spouses to covering up drinking binges and robbing banks. Only when Joe is taken offline is that information hidden away from humanity and order restored.

It's important to note the state of science and technology at this point. The United States had only recently come out of World War II, having dropped atomic bombs on Hiroshima and Nagasaki. The Soviet Union would not test its atomic bomb to kick off the Cold War for another three years, and computers only existed as massive projects like the Colossus, Harvard Mark I and ENIAC. The transistor computer would not be built until 1953, and ARPANET would not go online for another 23 years.

Technology in the home, meanwhile, was only beginning to emerge with electric appliances and television was still in its infancy (the BBC had only begun broadcasting TV 10 years prior.) Apple co-founder Steve Jobs was lauded for seeing a market for home computers in the late 1970s. Murray Leinster predicted it nearly a decade before Jobs was even born.

Science fiction, too, was in a transitional period, with many publications not yet running the darker, dystopian themes that would mark later periods in the genre. Gene Bundy, special collections librarian for the Williamson Science Fiction Library at Eastern New Mexico University, said that this was no accident.

"In general, the post-war years science fiction was controlled by [Astounding Science Fiction editor] John W. Campbell who thought science would solve it all," Bundy told The Register.

"He steered the direction stories took, only bought stories that went where he wanted them to go, hired writers to write the stories he wanted."

Where A Logic Named Joe really inspires, though, is not with its vision of the placement of technology, but in the ways in which it could be used both for the benefit and detriment of society. Leinster is able to present conflict by making technology a solution that works just a bit too well.

Dr Ellen Peel, Professor of English and Comparative Literature at San Francisco State University, noted that Joe, by design, is never truly portrayed as a villain or menacing figure, as machines are so often viewed in more dystopian works of science fiction.

"It's often interesting to look at the names (or the lack thereof) for robots and other constructed bodies," Peel told The Register.

Joe poses a threat to society not by turning himself into an "evil" character, but merely by being helpful to the point of enabling man's worst qualities. This, too, is eerily prescient, as the modern internet has proven to be both a great enabler of education as well as a way to expose and indulge our worst tendencies.

Peel said this part of the story may attest not only to Leinster's vision of technology, but to some basic tenets of human psychology, a field that, like computing, was just coming into its own when the story was written.

"Ordinary logics already grant many wishes, but what Joe grants are the forbidden ones, the 'monsters from the id,' as they are called in Forbidden Planet," Peel said.

"It is suggestive that the narrator stores Joe in the basement, sort of a subconscious."

This, perhaps, is what makes A Logic Named Joe such an eerily prescient work of literature. Leinster had not only the foresight to envision a world in which technology in general, and computing in particular, take up a central role in the day-to-day life of the average family, but also the way in which having so much knowledge at our fingertips can lead us into the worst parts of our collective psyche.

Great works of science fiction examine not only the roles in which science will change our lives, but also isolate the basic qualities of the human experience and study just how the human condition will react, and endure, when new experiences are presented and new frontiers are opened.

In this way, Leinster does in a few pages what many authors spend an entire year hoping to accomplish. ®