Labour: We want the Snoopers' Charter because of Snowden 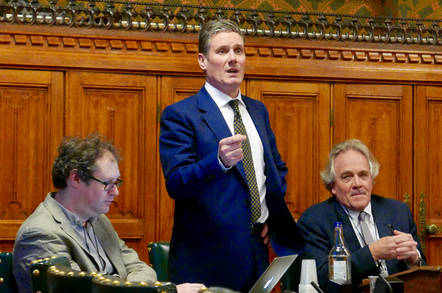 Starmer, MP for Holborn and St Pancras, said the left-wing party will ask Blighty's Conservative government to conduct an independent review into the new powers and definitions included in the draft law.

Responding to criticism of Labour's decision to abstain from voting on the second reading of the Investigatory Powers Bill, which eventually only received 15 votes against, Starmer explained that his, and the Labour party's, position was that the bill was "absolutely needed."

They supported the bill because the powers currently available to the police and to the security agencies are currently"scattered between different legislation", as are the oversight mechanisms for those powers. The distribution of these powers meant "a comprehensive and coherent framework is necessary" to bring them together and ensure Parliamentary knowledge and public clarity regarding what was going on.

Between 2008 and 2013 Starmer was the Director of Public Prosecutions, a period which he said informed his opinion on the necessity of the powers the security services and police need to protect the country.

The Investigatory Powers Bill was "also needed because of Snowden," said Starmer. The Snowden revelations showed that the security services "were using powers that the public had no idea they had, or that they were using, because the previous legislation was broad enough to allow that to happen."

If this legislation doesn't go through, the security services will continue to exercise those powers without the safeguards the bill intends to introduce, Starmer explained: "The approach that I and the Labour party has taken is, I hope, a logical approach which involves a lot of challenge to the Government during the committee stage."

Starmer said that “the first question for us is whether the government has made an operational case for the powers” in the bill. Citing the report by David Anderson and those of the Parliamentary committees, Starmer said that despite the government having published operational cases showing why the most questionable powers being included in the bill were needed by the spooks, "they weren't convincing."

Starmer said Labour's position was that there needed to be "independent evaluation of these operational cases" for the powers to be included, something which fellow panel member Eric King, director of the Don't Spy On Us coalition, agreed with.

King specifically noted the data retention power; the spooks' recently-revealed retention of bulk data on the public's telecommunications. We should learn from America, King suggested.

"They got rid of this power, which was authorised under section 215 of the USA PATRIOT Act," said King, under which "companies were being ordered by FBI and NSA to hand over all of their phone billing records."

As the very first of the Snowden revelations, the NSA's phone snooping excited great upset in the United States, where NGOs and non-government politicians immediately decried the draconian powers the USA PATRIOT Act had brought in, said King.

As such, President Obama created a panel specifically to look into that power, and directed a separate presidential review group to do the same thing. King noted how, in response to the criticism, spooks came out and declared that it was "an essential power" which was "effective and vital" for national security. The spooks more than 60 cases for the power, and "waited with baited breath" as the two panels dug through their evidence.

"Over the course of six to eight months these cases were whittled down to only 12," said King, and when the report came out it found that only one of the cases had actually provably resulted in any new information, and "it was not the prevention of the terrorist attack", but rather the case of a taxi driver who had criminally routed money to a terrorist organisation in Somalia.

"This is my litmus test for the operational cases," said King. It is not, he said, enough to provide theoretical cases about how these powers have been useful, according to King, as the UK is using an equivalent power to that which was struck down in the US. King declined to support the power until he saw "an operational case showing how MI5 are using the same power so drastically differently that it is useful."

The power is in our hands

Clarifications on the powers is one of Labour's main issues, according to Starmer, who said "the Snowden saga showed where this lacked in previous legislation." Legislators, and the public, need to know what the powers are, the circumstances in which they're to be used, and what the safeguards on those powers are.

Starmer stated that "the major concern" that the Labour party has, is that between the draft version of the Investigatory Powers Bill and the version that was laid before Parliament on 1 March, "the government has gone in the wrong direction, with worse definitions, and so much [has been] pushed off into the six codes of practice."

Labour abstained according to Starmer, "because to block the legislation altogether, and because unless DRIPA is renewed in December, these important powers would be lost altogether."

Jim Killock director at the Open Rights Group and fellow panel member, responded that "we shouldn't fear a 'no' vote from Labour. It's quite easy to clear up the problems with DRIPA, the sunset clause can be renewed" to which Starmer nodded.

Killock added, "I'm glad Keir agrees with that" although it did not seem as if Labour, at this juncture, would support King's proposal to split the bill to allow the renewal of the powers under DRIPA while scrutinising the new powers at length.

"In relation to safeguards, interception should require warrants," asserted Starmer. "The current proposal is to sign off on a warrant application by a judge and the secretary of state" explained Starmer, who adding that there were two or three things to note about this.

Such a "double lock" said Starmer "is not wrong, but what is the judge going to actually do when they see the application? Is it to ask if the secretary of state has acted reasonably?" That was a very "long-armed check" in Starmer's opinion. "That isn't really a check at all."

On the other hand, a judge could say 'I need to see the same material as the secretary of state and also sign off on it.' That's what we call an equal lock.

Labour would push for this, as well as for tighter definitions on what internet connection records, or ICRs, were.

"ICRs are a new power, they're a record of the websites that people have visited, which was very broadly defined on the face of the draft bill, and a widening definition has since been put forward." said Starmer.

Killock noted that it was important to "talk about how ICRs are used" especially "this thing called the 'request filter'."

As The Register first reported, the Investigatory Power Bill's request filters are a cunningly worded inclusion of a citizen database. "This is recognised in the codes of practice," said Killock.

The codes of practice explain in one operational case how the request filter would be used to search for people who had been in two particular locations. This is done by matching the phone location data which all services record, in a process treating those legally obliged records as an enormous and distributed database, which has been made much easier by using modern software to query distributed records.

Killock stated that what was lacking in the bill was "any sense of restraint." This was a police power "being presented as a privacy measure, because police only get the relevant results," he added.

"I think it's really important that this goes. There is no need for it. The real restraint in surveillance is not the laws, but the practicality of that surveillance. I think that's the right way to go about these powers, make the surveillance a little bit difficult so that there is some process in play."

Following the Q&A, in which the audience criticised Labour's position, Starmer stated the Labour Party was "resisting the sense in which this is wrong in principle" but would be prepared to prevent the government meeting its end-of-year deadline for the passage of the bill if the party did not receive concessions regarding the safeguards and definitions in the bill. ®