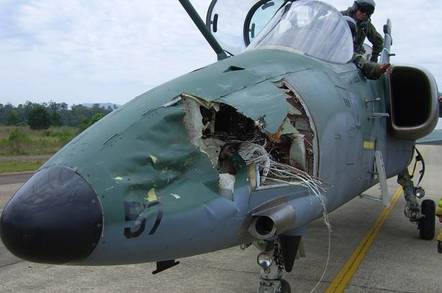 Bird or drone? We'll find out sooner or later

US government officials' grave warnings that drones could cause a disaster above the nation's airports are overstated, a study by George Mason University has found.

We're told birds are a much bigger threat to aircraft than folks' unmanned aerial systems (UASs).

"We further estimate that 6.12 x 10−8 collisions that cause an injury or fatality to passengers on board an aircraft will occur every 100,000 hours of 2kg UAS flight time, or once every 187 million years of operation."

The study looked at recorded bird strikes on American aircraft since 1990, and the incidence of actual injury to passengers. Over the time period, 389 people have been injured by a bird strike, although 100 of those came from a single event when US Airways Flight 1549 was forced to land in the Hudson River.

As for fatalities, there have been only 12 in the last 25 years due to animal impacts, and only one of those was on a commercial airliner. The rest were helicopters, experimental and vintage aircraft, or smaller propeller-driven planes.

There are an estimated 10 billion birds in US airspace, so using this data, the boffins believe the odds of a bird strike are about one bird in a million hitting an aircraft. But there are only a million drones in operation, so that bumps the odds down considerably.

The academics admit that there are some weaknesses in the study. For a start, there is no research on the physical effect of drones hitting aircraft. The impact of a battery pack on a jet turbine or cabin screen is likely to be greater than that of a bird of a similar mass as the drone.

But on the other hand, birds tend to flock together and if an aircraft hits a flock, the potential damage is much greater – in the case of Flight 1549 it was a flock of geese that took out both engines simultaneously.

The study also ignores the fact that many airports dissuade birds from entering their airspace by using chemical or auditory repellents, or by hosting tame birds of prey that patrol the perimeter. Under the circumstances, it's not a bad idea for aviation authorities to carry on enforcing blocks on drone traffic around airports. ®