Apple tells iPhone court 'the Founders would be appalled' by Feds

Thomas Jefferson would kick your ass for this 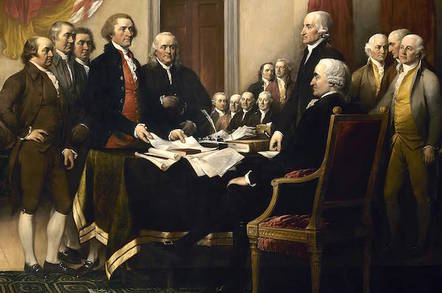 Apple's latest response to US Department of Justice (DoJ) demands that it alter its operating system to allow access to a terrorist's iPhone using the 1789 All Writs Act is typically blunt.

"According to the government, short of kidnapping or breaking an express law, the courts can order private parties to do virtually anything the Justice Department and FBI can dream up. The Founders would be appalled," the court document [PDF] states.

The US government's attempts to use the ancient piece of legislation to force Apple to circumvent its existing security protocols went well beyond the scope of the original purpose of the All Writs Act. This was especially egregious, since the DoJ is also asking the court to consider the case on its sole merits, rather than considering the wider implications.

In addition, the DoJ is attempting to use the All Writs Act to get around the Communications Assistance for Law Enforcement Act (CALEA), which requires telecom companies to cooperate with law enforcement requests. Apple is an information provider, not a telco, the company asserts, but the DoJ begs to differ.

Even if the court does decide the CALEA applies to Apple, the order to bork its operating system goes beyond the scope of the act as it was originally envisaged. This was confirmed by the then-head of the FBI Louis Freeh when the 1994 act was being debated.

"This legislation does not ask [companies] to decrypt. It just tells them to give us the bits as they have them. If they are [en]crypted, that is my problem," Freeh told Congress at the time.

In the meantime, the DoJ's request would be onerous in the extreme to Apple, and rather dangerous. The government is understating the requirements of Apple complying with breaking into iOS and is using legal threats to push Cook & Co into compliance.

"The government also implicitly threatens that if Apple does not acquiesce, the government will seek to compel Apple to turn over its source code and private electronic signature," the filing states.

"The catastrophic security implications of that threat only highlight the government's fundamental misunderstanding or reckless disregard of the technology at issue and the security risks implicated by its suggestion."

Government lawyers have suggested that Apple built its encryption system for "marketing purposes," so that it could sell the systems as free from government spying. That's provably untrue, Apple states.

Since the encryption system was first introduced in October of 2014, Apple has promoted its iPhone in 1,793 adverts worldwide, generating 253 billion views. "Not a single one advertised or promoted the ability of Apple's software to block law enforcement requests for access to the contents of Apple devices," the company said.

Furthermore, the FBI hasn't made a serious attempt to decrypt the terrorist's phone using other methods. It cites senior officials, such as former National Coordinator for Security Richard Clarke, who say that they are sure the NSA could crack open the phone without Apple's help, and the San Bernardino police chief has already said there's a good chance there is no useful intel on the phone.

When the FBI director was questioned on this topic at congressional hearings, he said that he didn't know if all avenues for getting into the phone have been excluded. Director Comey also admitted that the FBI could have opened the iPhone easily but locked it mistakenly by changing the password remotely.

Finally, Apple says that the order to write software to break its own security is illegal under the First Amendment. Writing code is speech, Apple argues, and the DoJ's demands are forcing the company to express itself in ways it finds offensive.

"Almost 90 years ago, Justice Louis Brandeis, reflecting on the 'progress of science' beyond wiretapping, famously warned that '[the] greatest dangers to liberty lurk in insidious encroachment by men of zeal, well-meaning but without understanding'," Apple concludes.

"In this case, the government's motivations are understandable, but its methods for achieving its objectives are contrary to the rule of law, the democratic process, and the rights of the American people." ®