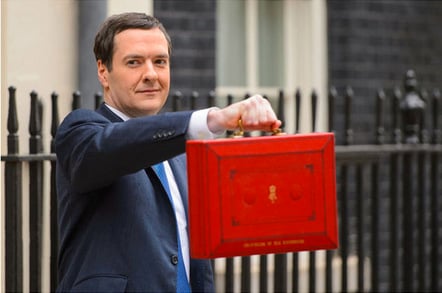 Budget UK Chancellor George Osborne has said today the government will make online marketplaces such as Amazon and eBay liable for traders evading VAT in the UK - in his 2016 budget which outlined a swathe of tax cuts.

The growing number of sellers based outside Europe and sell goods online without having a registered VAT number despite holding stock in the country is an issue The Register was among the first to report on more than a year ago.

The practice is thought to be undercutting a number of small sellers who are unable to compete against fraudsters.

In his Budget speech Osborne said: "Sites like Ebay and Amazon have provided an incredible platform for many new small British startups to reach large numbers of customers. But there’s been a big rise in overseas suppliers storing goods in Britain and selling them online without paying VAT.

"That unfairly undercuts British businesses both on the internet and on the high street, and today I can announce that we are taking action to stop it. That’s the first thing we do to help our small firms.”

The accompanying budget document promised to level the playing field for businesses. It said the government will legislate to provide HMRC with strengthened powers and enable HMRC to hold an online marketplace jointly and severally liable for the unpaid VAT of an overseas business that sells goods in the UK via the online marketplace’s website.

Headline tax cuts included a further slashing of corporation tax to 17 per cent by April 2020. Corporation tax was 28 per cent at the start of last Parliament, which was cut to 20 per cent and then 18 per cent.

An eBay spokesman told The Register: “We welcome rules that ensure a fair marketplace and will review the detail of the legislation. Even without such a law, we would not hesitate to suspend sellers found by HMRC to be evading VAT."

He added the company is already working closely with HMRC and has established a dedicated information centre on its site for Chinese sellers to assist them in understanding their tax obligations. "We have also contacted hundreds of Chinese sellers to notify and educate them on the need to comply with the law," eBay said.

An Amazon spokesman told The Register: “We fully support VAT compliance by companies selling products through online marketplaces and offer tools and information to assist our sellers in their VAT obligations. We are currently reviewing the Government’s proposals, and we will naturally comply with any legislation.” ®