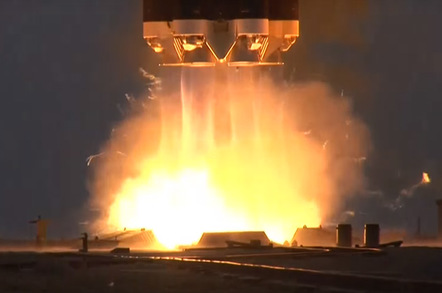 We're obliged to those readers who pointed us in the direction of a hi-def vid of yesterday's ExoMars mission launch, in which Europe's Trace Gas Orbiter (TGO) and Schiaparelli "entry, descent and landing demonstrator module" (EDM) thundered aloft from Baikonur Cosmodrome atop a Proton-M rocket.

Magnificent, but compare that with ESA's version, which although it looks as if it were shot through a toilet roll tube with clingfilm as a lens, has a fantastic volcanic lair soundtrack vibe:

For those of you who're wondering what in God's Blue Yonder we're talking about, try this:

Lovely. ExoMars is "in good health" and on its way towards an October rendezvous with the Red Planet. The European Space Agency's head honcho, Johann-Dietrich Woerner, said yesterday: "It's been a long journey getting the first ExoMars mission to the launch pad, but thanks to the hard work and dedication of our international teams, a new era of Mars exploration is now within our reach."

Reports that Woerner made his pronouncement from a black leather chair while stroking a white Persian cat are unconfirmed. ®