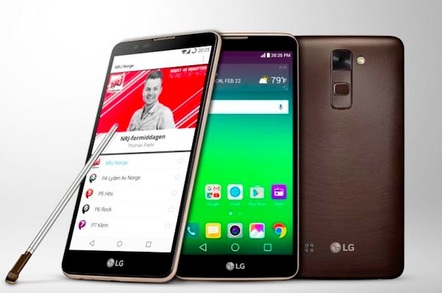 Here's an oddity: LG has launched a smartphone with a built-in DAB+ broadcast digital radio.

LG Stylus DAB+ is a 5.7-inch, 1280 x 720, Android (Marshmallow) machine with a quad-core CPU humming along at 1.2GHz. Up front you'll find an eight-megapixel camera and out back there's a 13-megapixel effort. Inside is 16GB of storage and a micro SD card so you add more if the spirit moves you. As the phone's name suggests, it comes with a stylus for those who would rather not poke their devices directly.

There's also the aforementioned DAB+ radio, which LG thinks will appeal to those who would rather not eat into their data allowance to stream music. Operating the radio apparently requires but a single click of a button on the supplied headset, which scans the airwaves for nearby stations and makes them available in an “exclusive” app.

LG hopes developers will play with the device and create “their own tailored apps for the Stylus DAB+, in which internet services complement broadcast radio.”

Good luck with that, LG.

Prices haven't been announced, but LG's Australian tentacle suggests news of the phone's existence has been made to coincide with a DAB+ industry conference and that it may be a while before the phone lands in stores near you. ®

Cloudy analytics as an experience aggregator to the rescue? Maybe