Silicon Valley VCs ranked one to 100 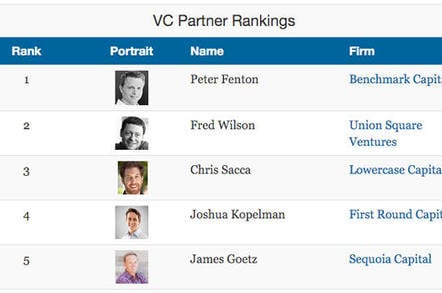 Silicon Valley's top 100 venture capitalists have been ranked and the results posted online, sparking an ego explosion in Northern California.

Startup tracking company CB Insights has been working with The New York Times for a few months in an effort to rank the moneymen.

In order to do so, they came up with the very-Valley term "investor mosaic algorithm," which basically plots a number of data points including the frequency and size of startups' sales, the value of their investments, how consistent their bets have been, and their network of contacts, to come up with a figure.

And top of the list came Peter Fenton of Benchmark – which was not a huge surprise since he has been persistently given "VC of the year," ranked highly in Forbes' "Midas List" and other similar rewards for his foresight in investing in companies such as Twitter and Yelp, as well as a range of other companies you may have heard of but which were bought by companies you almost certainly have.

As for VCs you may have heard of:

Notable by their absence:

Needless to say, the VCs on the list and missing from it have been entirely professional and said little about the methodology or even acknowledged the list's existence – all while furiously talking to everyone about it. ®