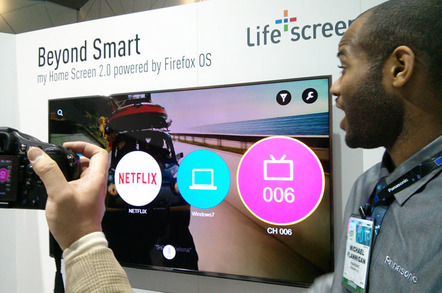 Owners of Panasonic smart TVs say their sets have been unable to access applications – including video-streaming apps – because backend servers keep falling over.

The Panasonic UK Twitter feed has been beset by folks demanding answers and refunds after their expensive Firefox OS-based tellies refused to work properly.

The TVs phone home across the internet to Pana's backend systems – such as mhc-xpana-eu.myhomescreen.tv – and if they can't reach the machines, the TVs assume the network is down. That totally stuns the TVs' software, and leaves people unable to start up installed apps, we're told.

Confusingly, the telly firmware tests the network again using a different remote server, finds that working, reports the network is OK after all, and then does nothing to fix the broken app loading.

Reg reader and Panasonic 65DX902 TV owner Aidan Padden said the outages have been an ongoing issue for some time now. The backend servers have been having a hard time lately staying up, which coincides with the launch of Firefox OS-based Panasonic DX-series UHD TVs at the end of February. Perhaps Pana's systems can't keep up with the demand from new boxes.

"The problems have occurred frequently since the introduction of the Firefox OS TV, and basically when you're in the apps homepage it connects back to a Panasonic server to get the details of how to launch – except when the server is unresponsive you've got a very dumb Smart TV," Padden said.

"They've also cocked the code up, as it assumes if it can't talk to that server that the entire network is unavailable and reports a network error."

People say normal broadcast television and on-demand video from a cable box can still be watched, but streaming apps such as Netflix and BBC iPlayer are disabled by the server outages.

Netflix error on Panasonic TV. Why do we need Panasonic servers for apps? No notification, time scale or apology @PanasonicUK @NetflixUK

The apps in my Panasonic TV broke last night. Turns out Netflix etc. must phone home to a Pana URL even if it's down https://t.co/WuvxWRDvOI

Padden said he has tried to contact Panasonic on multiple occasions in hope of shedding light on the issue, but has not yet heard back from a rep. In the meantime, he said he hopes the company will at least make some effort to connect with customers.

"You currently have thousands of users across Europe who have experienced problems since yesterday who are all unhappy and putting negative press across forums across Europe and the Panasonic Facebook and Twitter pages," Padden told us.

"This is not good press at a time when you are launching a new range of exceptional hardware."

Panasonic did not respond to a request for comment on the matter. ®